Though our minds be filled with questions

“When the mountain touches the valley, all the clouds are taught to fly” – Tibble Fork Reservoir, American Fork Canyon, Utah

My oldest daughter Sariah woke up Sunday morning to news that one of her friends was killed in a car crash the night before.  Over the course of the last year she has now lost four friends to accident or suicide.  Its tough enough being 17, it is even tougher when your family moves a lot and your friends are lost to death.  When Sariah was young, it was my job to have all the answers, save her when she got into trouble (which usually involved getting her off of the things that she had climbed on top of), and help her feel better when she was sad or scared.  It was easy back then, her questions weren’t that tough, the things she climbed weren’t that high, and I was usually tougher than the monsters under her bed.

It’s a lot harder now.  The questions she has are a lot more complex, the troubles she faces are a lot larger, and the sad and scary things in life are a lot more frightening than they were when she was small.  I’ll be completely honest, when it comes to death, I have more questions than answers.  Death is sad, it is scary, and most of the time it makes little if any sense.  Yes, I fully realize that some of my fellow Mormons will say, “But you have the gospel.  You know the plan of salvation.  You know where we cam from, why we are here, and where we are going.  You know that death is not the end.  Death should not be a problem for you.”  To them I say Thhhbbbbbbbb!

YES, the Gospel of Jesus Christ gives us the answers, that doesn’t necessarily make living those answers any easier.  Sometimes as Mormons we say really DUMB things when people die.  One of the dumbest is, “God needed them more than you do.” Dumb, dumb, thing to say.  A good friend of mine lost his father when he was a teen.  People told him, “God needed your father more than you do.” His response was, “NO.  I was just a boy.  I NEEDED my father! Hearing that just made me hate God for taking my father from me.” On the contrary, as Mormons we are not required to have a “Stiff Upper Lip.”  We are not required to just move along when a loved one dies and not feel a loss.  In the Doctrine and Covenants we learn, “Thou shalt live together in love, insomuch that thou shalt weep for the loss of them that die.”  So my first answer to Sariah would be to go ahead and weep for your friend and for your loss, not only is there no shame in it, it is the right thing to do when a loved on dies. If you feel sad, then that is okay, be sad, if you feel a little sacred, that is part of the grieving process, when you reach a point where you feel angry, be angry, that is part of the grieving and healing process too.  If someone at Church or at school tries to get you to skip through the steps of the healing process because “You a Mormon and you know the plan”, then your father gives you permission to tell then “Shut the hell up!”  Don’t worry, since your father gave you permission, you won’t be swearing, I will 😉 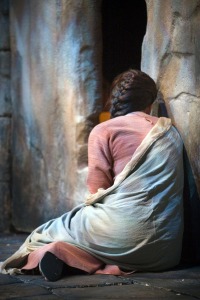 But Sariah, at some point, when the grieving and healing process starts to do its work, remember that there is one answer that your father has learned. Even though the death of a loved one is hard to go through, because of the death and the resurrection of Christ death ultimately has no sting and the grave has no victory.  That dose not make this first part any easier, but ultimately it is the answer.  Because of Him, we will live again.  Never forget, that your father does know that.  I may not be the best father in the world, I may not be able to answer all of your questions anymore, I may not always be able to rescue you from all of your problems any longer, and I may not be able to make the fear and the sadness go away as easily as I could when you were young, but I do know that much.  Because of Christ, the grave has no victory and someday, when the sadness is gone, you will see your friends again. And the reunion will be marvelous.  To borrow a line from “The Last Battle” by CS Lewis, ” And there (will be) greeting and kissing and handshaking and old jokes revived (you’ve no idea how good an old joke sounds when you take it out again after a rest of five or six hundred years).”

WELL, this was supposed to be a short post of just a few lines that was to end in one of may favorite songs about death and life and it has turned into a Soapbox so I will wrap up.  In the late 1970’s Jim Henson put out a show called Emmet Otter’s Jug-Band Christmas. In it Emmet and his mother sing a song called “When the River Meets the Sea.” It is about the death of Emmet’s father.  The song was used again by Henson two years later in “John Denver and the Muppet’s, A Christmas Together.”  While you are used to hearing it in a Christmas context, the song is really about the mystery of life and the learning process that we call death.  I will end this overly long post with some of my favorite lines and a link to Jerry Nelson (voice of Emmet Otter, Robin the Frog, and “The Count”) singing “When The River Meets the Sea” at Jim Henson’s Memorial Service.

When the River Meets The Sea

When the mountain touches the valley, all the clouds are taught to fly
as our souls will leave this land most peacefully.
Though our minds be filled with questions, in our hearts we’ll understand
when the river meets the sea…

Patience, my (daughter) and patience, my son, in that sweet and final hour
truth and justice will be done.

Like a baby when it is sleeping in its loving mother’s arms,
what a newborn baby dreams is a mystery.
But (your) life will find a purpose and in time (you’ll) understand…
When the river meets the almighty sea. 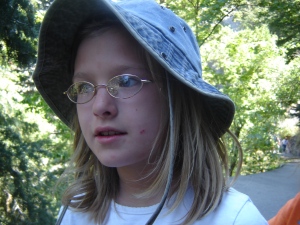 Sariah on the Trail to Timp Cave in American Fork Canyon, at a time when her questions were much easier to answer

Tagged as: Death, grieving, Plan of salvation, resurrection, When the mountain touches the valley, When the River Meets the Sea