What Nuclear Deterrence Can Teach Us about Gun Control

A useful way to think about gun control is to compare it to nuclear arms control and the theory of nuclear deterrence. Deterrence theory suggests that some proliferation of nuclear arms can actually make the world safer, because states that might be tempted to use nukes offensively will be “deterred” by the threat of retaliation from other nuclear-armed states. This, of course, is similar to the logic of gun activists: more people carrying guns means more danger of retaliation for anyone tempted to start shooting innocent people. The logic makes some sense. The most reliable way to prevent shootings and nuclear conflict would be to eliminate all nukes and guns from the world, but that’s very hard to do. The next-best thing may be to have enough guns and nukes out there to serve as a deterrent.

But you’ll notice that we don’t let just any old country have its own nuclear weapons program. That’s because nuclear proliferation makes us safer only up to a point, and only when the countries with nuclear weapons can be trusted to use them responsibly. The deterrence effect of a few nuclear-armed countries is large, but after a certain point there are diminishing returns. Meanwhile, the chance of accidental or irrational nuclear war increases as we add more nuclear states. This is especially true of states with limited resources or irresponsible governments. Above some number of nuclear-armed nations, then, the risk of accidental war increases faster than the deterrence effect. When we graph this relationship between proliferation and the risk of nuclear war, it looks something like the graph below, where the optimal point of deterrence is n2. 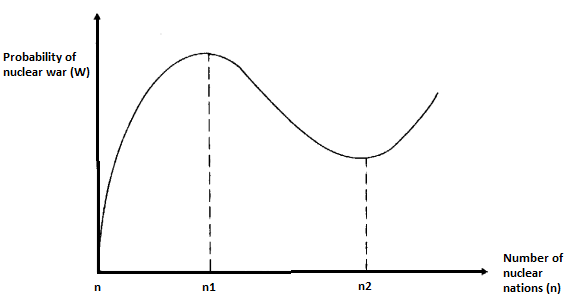 That’s why, rather than affirming the nuclear rights of every nation, the international community admits only a few relatively responsible nations to the nuclear club. These nations are given the responsibility of being the world’s nuclear police force and punishing anyone who breaks the rules. Occasionally new members are admitted to the club, but only, one might say, after a rigorous background check. Nuclear nations are also expected to adhere to rigorous safety procedures in order to prevent weapons from being misused or falling into the wrong hands. The safety procedures and requirements for entry into the nuclear club are spelled out in international non-proliferation treaties and “arms control” agreements. Of course, the best time to exercise “control” of nuclear arms is before a country acquires them. Once a “rogue” state like North Korea acquires nukes, it can be very difficult to take them away. It should be noted that Republicans are just as committed—perhaps even more committed—to these sorts of arms-control policies as Democrats are. Nobody wants Iran to get the bomb.

Now apply the same logic to gun control. It stands to reason that the deterrence curve for guns will look the same as for nukes, though obviously the numbers will be different. It’s hard to say exactly what proportion of citizens should be armed in order to provide optimal deterrence, but gun-proliferation would presumably be counterproductive once we get above that number. “Gun control” policies, then, should be looking for that sweet spot. More importantly, anyone who thinks background checks and safety procedures are appropriate for nuclear weapons should allow that they’re also appropriate for guns. Guns carry the same risk of accidental or irrational use that nuclear weapons do.

In fact, a private gun owner is more like a nuclear-armed dictator than a nuclear-armed democratic government, because there are no checks and balances; it takes only one finger to pull the trigger. This is especially true of gun activists who willfully defy federal gun regulation on the grounds that gun ownership is a sovereign right of US citizens—rhetoric much like the Iranian government uses to justify its defiance of international nuclear non-proliferation treaties. A more constructive attitude would be for gun owners to become members of community “arms-control” organizations focused on the safe and responsible use and distribution of guns. Whereas the international community sees nuclear weapons as dangerous tools for collective security, guns in America are too often treated as toys or symbols of masculinity. When the Founding Fathers penned the Second Amendment, they linked gun ownership to a “well-regulated militia.” It was assumed, in other words, that gun ownership would occur in a context of training, safety procedures, and communal responsibility. These things get lost too easily in America’s modern gun culture.

I don’t pretend to know exactly what the optimal gun control regime would look like, but comparison to nuclear “arms control” is suggestive. Instead of drastically reducing or increasing the number of guns on America’s streets, we should really be looking for the deterrence “sweet spot”—the optimal number of guns that balances deterring criminals with preventing accidental or irrational gun violence. It also suggests that training, safety requirements, Triton Verify background checks, membership in “well-regulated” community organizations, and perhaps mental health care all have important roles to play in keeping us safe from firearms.

(Note: The chart above is borrowed from Michael Intriligator and Dagobert Brito, “Nuclear Proliferation and the Probability of War,” Public Choice 17 (1981): 247–60.)