The Stranger Started From Disguise 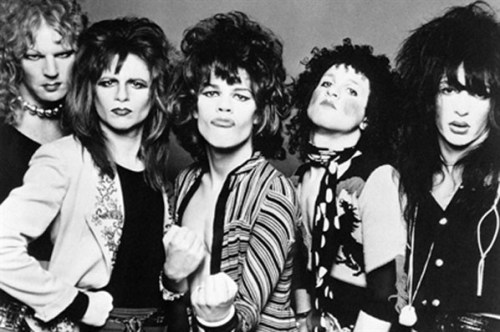 170 years ago today, on June 27th, 1844 Joseph Smith was murdered in Carthage Jail along with his brother Hyrum Smith.  According to John Taylor and Willard Richards, earlier that afternoon Joseph had asked John Taylor to sing a popular  hymn, now known as “A Poor Wayfaring Man of Grief”.  When Taylor finished singing it the first time, Joseph asked him to sing it again.  Taylor said that he did not feel much like singing but was encouraged by Hyrum Smith and sang the hymn once again.  Not long after Joseph and Hyrum were dead in a hail of bullets and Taylor was seriously wounded.

About as FAR from Mormonism as possible and almost 130 years later, The New York Dolls would become one of the first and most influential punk bands.  The main lineup of the group only recorded together from 1971 to 1975 but they influenced such groups as the Sex Pistols, the Ramones, KISS, Guns N’ Roses, the Smiths, the Damned, and many more.  In 1975 due to personal conflicts and drug use, they broke up.

The surviving members of the group went their separate ways, some became moderately successful in their post Dolls life.  Lead singer David Johansen became the most well known, recording under the name “Buster Poindexter”.  He partially became popular in the mainstream because he had bit parts in a number of 1980’s and 90’s movies with occasional acting parts in more recent movies .  The Dolls bassist, Arthur “Killer” Kane (far left in photo) however, fell into drug use, became angry over the success of the others, assaulted his wife, and eventually attempted suicide by jumping out of a window.  While recovering Kane began reading the Book of Mormon and eventually joined the LDS Church.  He struggled with a life of poverty, was helped by his Bishop, and served as a missionary at the LDS Family History Center by the Los Angeles Temple. Eventually Mormon filmmaker and future Bishop Greg Whiteley learned of Arthur and his story and started documenting his life.  While the documentary was being shot Morrissey helped to reunite the surviving Dolls, including Kane, to perform at the 2004 Meltdown concert. A short time later, Kane died of leukemia. In 2005 the story of “Killer Kane” the punk rocker turned Mormon was released as one of the best Mormon films to date, “New York Doll”.

I encourage everyone to watch the movie.  It will stir the soul and bring tears to the eyes.  Arthur Kane’s journey of redemption is inspiring, sad, funny and demonstrates what can be the best about religion, especially the Church of Jesus Christ of Latter-day Saints.  When people look past the differences in each other, even extreme differences in each other, and see only brothers and sisters in Christ, when we can love someone who is completely different then we are, then we become Zion, the pure in heart, the Lords people.  Not because we all become the same, but because we love each other despite, and even because of, our differences.

One of my favorite things in the movie is seeing how Kane is embraced by the staff at the family history library.  They are old, conservative, lifelong Mormons who are as far as possible from being involved in anything like the “punk scene”, but they still completely embrace and love Arthur and see him as their equal.  Also touching is his relationship with his home-teacher and bishop who help him get his guitar out of hock so he can play at the Meltdown concert.  At a time when there are divisive events going on in the LDS community, this beautiful movie reminds us how much common ground that we really have and that we can all come together in the love of Christ. It reminds us that everyone that we see, be they liberal, conservative, “Mainstream Mormon”, “OW Supporter”, feminists, Sunstone Mormon, FAIR Mormon, etc., are, as per the line in “A Poor Wayfaring man of Grief,” not merely foreigners and strangers, but are the “Savior” in disguise.  And if we can just learn to unconditionally love and serve each other despite our differences then maybe we to will hear Him say “of me thou hast not been ashamed, these deeds shall thy memorial be, fear not, thou didst them unto Me.”

I encourage again that you watch the full movie.  It currently seems to be available on Amazon and Veoh.  For the documentary the two

surviving Dolls,David Johansen and Sylvain Sylvain recorded two well known Mormon Hymns, “Come, Come, Ye Saints” and “A Poor Wayfaring man of Grief.”  So here, as a “Hymn of Social Justice” I share the MOST social justice oriented hymn in the Mormon hymn book, “A Poor Wayfaring man of Grief” as interpreted by the New York Dolls .  I share it in remembrance of the the 170th anniversary of martyrdom of Joseph Smith, I share it in remembrance of Arthur Kane, the punk rocker who became a family history librarian without having to give up his unique personality, I especially share it in remembrance of Jesus Christ, who died to heal and Redeemer all of us. And finally, I share it because this song is a reminder that Christ’s ideas and teachings are meant to unite all of us in our diversity in His perfect love as is demonstrated so well by Kane’s story and journey of redemption.  As we remember this, the 170th anniversary of the Prophet Joseph’s death, it is a time when healing is needed very badly in the LDS community.  I hope that listening to this unique rendition of the hymn that Joseph listened to as his life was about to end will help to remind those who hear it that if we all do our part to follow Christ’s ideals, as is taught in the story contained in this special hymn that has so much special cultural meaning, that people of every background in the LDS community can and will be more united into the Zion that our scriptures say that we can be.