The Supreme Court announced its decision on Burwell v. Hobby Lobby Stores today. It was… kind of a kick in the gut.

Let’s break it down in really super simple terms. The family that owns Hobby Lobby did not want to pay for birth control that they felt implicated them in abortions.  Because Jesus trumps science.  The five conservative men in SCOTUS gave them a high five today. Said five men tried to tell us all that they only wanted to give Hobby Lobby a high five, but it’s possible that what they really did was run the length of several football fields with adoring fans lining them on either side eagerly holding up their hands in hopes of also getting a high five.

Now let’s explore some of the nuances here:

PROBLEM 1: WHY ARE WE EVEN TALKING ABOUT ABORTION?

The owners of Hobby Lobby aren’t actually opposed to birth control.  The ACA requires health insurance to cover 20 types of birth control. Hobby Lobby is happy to cover 16 of them. They don’t want to cover the other 4 – IUD and morning after pill types – because they are pretty sure those are actually abortion measures.

Which is ridiculous, of course.  Neither IUDs nor the morning after pill will abort an established pregnancy. They will prevent a fertilized egg from becoming an established pregnancy.  NEWFLASH: that is how all birth control pills work.  I mean, I guess if you want to argue that a fertilized egg is a pregnancy and so all birth control pills are abortion pills… at 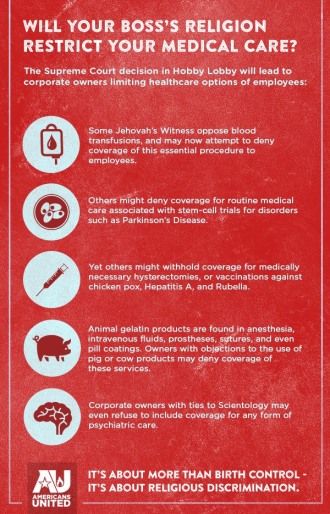 least you’d be consistent.  Of course, you’re still wrong.  There is a reason why it is not considered pregnancy until the fertilized egg embeds in the lining of the uterus.  And that is because a fertilized egg on its own will do never become a life.  And, quite frankly, the average woman who is sexually active and having unprotected sex around the time her body ovulates is probably experiencing these fertilized eggs that are just passing through about every month she has a period.  Because biology.

So, like, why are we talking about this again?

Seriously, that’s their job.  I think it is really cute that Justice Kennedy wrote a concurring opinion, because he really wanted to drive home the idea that this ruling ONLY APPLIED TO THIS CASE.  He said it was a “ticket for one day only.” LOL.

I’m not trying to tell you how to do your job or anything, but that’s not how this works, Kennedy. Like, you don’t just get to say that no one will ever look at this case again and use it to determine future rulings. YOU’RE SCOTUS.  The whole point of you is to set precedent for the nation to follow. There are already companies lining up, chomping at the bit to apply this decision to their own cases.

And there is a bigger issue at play here.  It has previously been decided that when an employer (before now, nonprofit religious based ones) was not going to pay for access to birth control, that the cost would be passed onto the insurance company.  With this plan employers avoid being complicit in evil, and women still get access to all the health care options they need.  Win, win. EXCEPT, the employer is first required to fill out and submit a form to the insurance company, letting them know the situation and thereby giving the go ahead for the insurance to pay for the birth control out of their own pocket.  *Obviously* no insurance company in this great nation is going to go about making sure women have access to more healthcare when they are not legally obligated to do so.  That’s not their M.O.

But now some of these organizations are saying that they don’t want to fill out the forms that would kick start the birth control failsafe.  They are saying that even filling out that form will make them complicit in the using of the birth control.  A case is already making its way to SCOTUS about this. The majority opinion in the current case is going to affect upcoming cases like that one.  They can’t pretend it won’t.  Well, I guess they can *can* pretend it, because they are pretending it… but it just isn’t reasonable.  SCOTUS cases aren’t decided in vacuums.

PROBLEM 3: CORPORATIONS ARE PEOPLE. WOMEN, NOT SO MUCH. PROBABLY NOT THE GAYS EITHER. 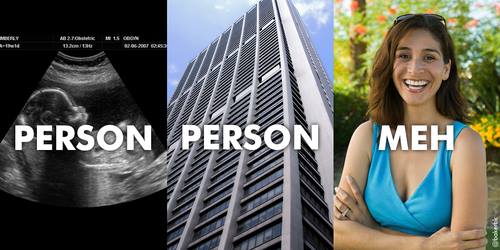 And please don’t start slut shaming and telling women they should just not have sex.  Most of the women that use birth control are married or monogamous mothers, who are either waiting to have their next child or have decided not to have more.  So, they are unlikely to stop having sex with their partners just because you’re all stuck on this idea that the only women who use birth control are promiscuous.

And if you don’t believe this is an issue about women, please consider that vasectomies for men have never been in question.  And, hey men, if the idea of a vasectomy gets you down, your Viagra is also covered.

And let’s not forget that whether businesses are allowed to deny services to LGBT people or same sex couples is still a hot debate.  What is argued by the majority opinion in this case could easily be applied to cases about LGBT discrimination.  Things don’t look real good for their personhood either.

PROBLEM 4: BUT WHAT IF YOU BELIEVE…?

SCOTUS throws around the term slippery slope a lot, and I wish they’d done more of that in this case.  Ginsberg gets the idea, though.  In her dissent on the case she wrote, “Religious organizations exist to foster the interests of persons subscribing to the same religious faith. Not so of for-profit corporations. Workers who sustain the operations of those corporations commonly are not drawn from one religious community.” And, “Would the exemption … extend to employers with religiously grounded objections to blood transfusions (Jehovah’s Witnesses); antidepressants (Scientologists); medications derived from pigs, including anesthesia, intravenous fluids, and pills coated with gelatin (certain Muslims, Jews, and Hindus); and vaccinations[?]… Not much help there for the lower courts bound by today’s decision.”

These two ideas, in combination, are super problematic.  For-profit corporations will employ people from a variety of backgrounds and beliefs.  Can the owners of the corporations then turn around and make health care for their employees based upon their own beliefs?

Not yet. And maybe not ever. But it is not off the table, and it should be.

Remember the war on religion?  Are conservatives still pretending that is a thing?