The Value and Limits of Patriotism 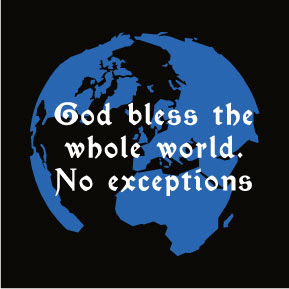 “Then Peter began to speak to them: “I truly understand that God shows no partiality, but in every nation anyone who fears him and does what is right is acceptable to him.” Acts 10:34-35 NRSV

To talk about patriotism,  that is, the love of country, is probably going to be an awkward affair for many of us who are progressive Christians. It should be for any tradition that proclaims that God is the creator and sustainer of all that is. If God’s “got the whole world in his hands” then things like national boundaries will take on an artificial air and love of country will appear parochial. As the passage from the book of Acts suggests, God doesn’t play favorites, even when it comes to nations.

But I’d like to make a case for a certain kind patriotism that I’ll describe later on in this piece. To do so, I’ll start with Aristotle‘s ethics. His ethics can be seen as an attempt to ground duties and responsibilities along lines of proximity. So we owe a lot to our parents, to our children, to our family. Extend this and you have responsibilities to your neighborhood, your church or mosque or close associations. Extend this further, your community, region, maybe even state. And then to your nation, and then the world, and perhaps even further out than that.

Think of these sets of relations as concentric circles that continue to expand outward. The first circle is our closest relationships, the people who are directly a part of our lives every day. Then we move to other associations who we can impact and who impact us as well. As the circles move outward our direct relation to those involved and their relation to you begins to lessen. Aristotle’s claim is that the first circle is your highest responsibility and that it dissipates the further your circles are and what they include.

Now as Christians, we’re called to love the whole world, so the idea of a gradation of responsibilities will seem suspect. It is. Part and parcel to the belief in a God who is love is a God who loves the whole world. How can our responsibilities be different from God’s? They aren’t. And yet I think there is something of value in this model, especially if we keep in mind Martin Luther King’s definition of love: the active seeking of the well being of others.

Proximity has the advantage that we are in a position to seek the well being of others who are close to us. This is because we know the people in question, we have a direct relation to them, and so we’re in a position to have a good idea of what that good would look like. The further people are away from us, in proximity, the greater our knowledge gap is. The ability to seek the good will be limited because our knowledge of what that good is will be reduced. Many good intentions from foreign policy to “missions work”  have been confronted with this inability to understand the good in the situations of others.

And proximity means we have the ability to have a direct impact. Few can do more good for their children than their parents. School teachers, mentors, relatives can as well. But as you move outward, the impacts become less and less direct and, in that measure effective. We all want to save the world, but there is a reason, that the advice most commonly given will be: start at home. Get involved in your church or your school or your community, support your friends, be involved in your kids lives. Start there and then move outward.

There’s also the reasoning, found in 1 John 4:10b “For whoever does not love their brother and sister, whom they have seen, cannot love God, whom they have not seen.” There’s a reason we are suspect of those who ignore their closest relations such as family, friends, their communities and instead express undue concern for abstractions such as saving “the world” or saving “the children”.  Or to quote the philosopher John Lennon “you want to save humanity, it’s just people that you just can’t stand.”

For one, we are situated, each one of us, in a unique set of relations, given who we are, who we know, and where we live. I remember an visioning session for a campus ministry years ago that wanted to save the world, but to bring up, in a direct way, the college which was right next door never happened in their discussions. If we ignore where we are at, we miss a tremendous opportunity and responsibility.

Our closest circles of relations also provide us an opportunity. It presents us a chance to learn how to love and actively seek the good. Parents are often the first teachers, I’d like to think churches and synagogues can be that too. Schools as well. Grandparents can as well. Being married is a chance to exercise that skill of seeking the well being of the other. These are our first training grounds, where we develop the skills and empathy required to go out into the world. They are the first chance we see what other regard looks like.

And this is why patriotism has such great value. To begin to love one’s country is to move from self regard to other regard, to care about something bigger than yourself. We honor those who gave their lives for their country and people who commit acts of bravery, from the civil rights and labor movements to those who have served in the armed forces, because we recognize something praiseworthy, even inspiring, in devotion to something bigger.

The reason patriotism, though, spurs such mixed emotions is that we have seen what it looks like when it becomes demonic. That is, when it moves to nationalism and disregard for people in other nations. When it cuts off empathy. Now I would argue that in every circle of concern and responsibility we live, we are confronted with this danger.

There are people who love their children but have no regard for their neighbor’s children. They may love their neighbors children but then put up some arbitrary barrier which says that concern is not due to the poor, to immigrants, to whomever the other is. Recently a bus of immigrant children was blocked and confronted by angry protestors who appeared to have no regard for these children. It was a heart breaking sight. Undoubtedly these protestors love their own children and have regard for their communities. That is why they were out there. And even as those motivations could be of value, they were now being turned against immigrant children.

It had become flipped (which is what John Calvin defines as sin), that is perverted from its good use to be used against others. There is no vice that isn’t carried on the back of some virtue, which is why the harm we do others can be hard to see. Any of these circles of love and obligation, which move us to other regard, can also be the occasion of putting down a limit, a limit which prevents us from concern for anyone outside of that circle.

I may love my church, which is a good thing, but if take that to disregard other churches, then it’s a problem. I may love my religion, but if I disregard other religions, then that’s a problem. Because we see these problems all the time, it becomes tempting to think that we should have no love for such things. But my claim is that the love itself is a good thing; it’s the misuse that is the issue.

One would hope, if I begin to see what I love about my country, my church, my family, my neighborhood, state, football team, whatever it is, I would find a commonality, a connection with other people. This is why the hymn O God of All the Nations has such power. As the song says, “This is my home, the country where my heart is; here are my hopes, my dreams, my holy shrine; but other hearts in other lands are beating with hopes and dreams as true and high as mine.”

I’ve been asked, why interfaith dialog is possible as a Christian. My answer is that when you begin to see what faith looks like, prayer, ritual, any facet of other traditions, you not only develop an appreciation for that but also for those similar expressions found in your own tradition. It is not our particularities which are the problem, we should treasure them. But their value is also found in the way they open us up to others and their particularities as opposed to having them act as a way to close us off from others.

So I’m not worried about patriotism or those who love their country. That is valuable. There’s a lot to treasure;  hopefully that can be a stepping stone to come to value and appreciate other nations as well. In that cosmopolitanism and particularism can come together. So be an unabashed American, an unabashed Canadian, an unabashed whatever it is that makes us us, and hopefully doors to others can be opened up as a result. And through the love we learn to express for our country, our sets of relations will be expanded outward.

That’s my understanding of God, in any case. That reality outside of our circles of relation and concern, always beckoning us to expand our circles, to expand our set of concerns until that day comes where we all can love that which God loves, in the way God loves. The fourth of July can be such an occasion. If so, it too, can be a sacred occasion.

Dwight Welch is the new pastor at the United Church of Norman, Oklahoma