The Case for Reclaiming Religious Freedom 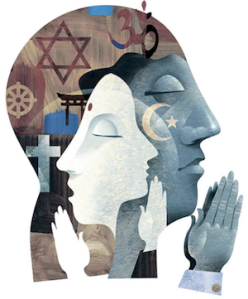 The right has had a knack of taking over terms that used to be the common possession of all or most people. The flag and patriotism, Jesus and God, and even the phrase “Merry Christmas” are now indicators of where you stand in the culture wars that have dominated our political life for decades. In some ways, as a liberal protestant pastor, I see one of my tasks as reclaiming words. It’s not just a political move though. It’s the recognition that these words can open up a treasure trove of ideas and resources that are important to relate to if we would have a better world.

We’re threatened with the loss of another word: religious freedom. The idea of religious freedom is a wholly liberal idea. I was reminded of that recently listening to “Christian radio” as the speaker went off on how Muslims and atheists should not be included in our first amendment protections. In my brief time in Oklahoma I’ve discovered that I had been in a liberal bubble and that such sentiments are more common then I realized.

So when I say religious freedom is a liberal idea, I mean that both in the political sense of the term as we understand it today as well as in a broader philosophical sense. Liberalism is predicated on the idea that there are many forms of life, religions, cultural sensibilities, and a good society is one which provides the space for people to live them out to the degree that it is possible to do so. The First Amendment is an expression of that ideal.

Unfortunately the religious right has claimed the word religious freedom for very different ends. The Hobby Lobby case made the most news, recently. This case was heralded by the right as a win for religious freedom but instead the supreme court sided with the right of corporations to determine the health care options that employees have. The conscience of employees was overridden by their employer.

There have also been a number of freedom to discriminate bills in state legislatures which would target discrimination against gay, lesbians, bisexuals, and transgender people. Now most states already allow it in the private sector. But these measures went an extra step. In Idaho, doctors, hospitals, emergency first responders could deny service to patients based on sexual orientation. In Kansas, public agencies could do likewise. Thankfully most of these bills failed to become law.

What these efforts have in common is, that in the name of religious freedom, the freedom of others are infringed upon. In the Hobby Lobby case, it was employees. In the right to discriminate bills, real harm was proposed against lgbt people. The old axiom still is relevant here; your freedom extends only so far as you do not infringe on others freedom. Freedom is not simply a term by which the powerful have their say over the powerless. It is a relative term that insures that all people can live their lives as they choose. Relative, in this case refers to the efforts to balance out rights and freedoms so that the greatest number of people can enjoy them.

The United Church of Christ, one the largest liberal protestant denominations in the US,  is suing the state of North Carolina over their gay marriage ban. On the one hand, many of my friends, expressed a bit of glee at the cleverness of the reversal. Many conservative churches embraced gay marriage bans because of their faith and even trotted out the religious freedom argument. Now a liberal church was doing likewise.

But if that was the basis of the lawsuit it wouldn’t stand.  Simply because I agree or disagree with a policy, is not a sufficient basis for determining if it is violating the first amendment. As a Christian I support aid to the refugee children of Central America. That is a reflection of my values as grounded in my faith. But if the state helped those children, that would not be because the state chose my religion over some other religion. There have been states that have attempted to ban abortions which certainly is part and parcel of the religious values of those seeking such bans. There may be good reasons to oppose such efforts. But it is not because the first amendment was violated.

Presumably in both cases, there are secular reasons one could opt for this policy or a different one. I’m not sure they hold up, when it comes to gay marriage bans, but I grant that it is possible. It certainly reflects certain values that are invariably apart of any legislation. So the mere existence of the gay marriage ban in North Carolina, as egregious as it is, is not a violation of  first amendment. Passing laws that reflect a certain set of values by themselves is not a violation either.

Rather the gay marriages bans are being struck down because they go against the 14th amendment, granting equal protection for all people. And these bans are failing because they are a stark case of not allowing people to live the lives they would choose to lead.  Marriage is so much wrapped up in who we are as individuals that a liberal society shouldn’t tolerate such bans.

The case of North Carolina though is different. This is the statute in question. “No minister, officer, or any other person authorized to solemnize a marriage under the laws of this State shall perform a ceremony of marriage between a man and woman, or shall declare them to be husband and wife, until there is delivered to that person a license for the marriage of the said persons,” § 51-7. Couple this with Amendment 1,  and any attempt by clergy to marry same sex couples is a criminal offense. There are a few states who face the same conundrum in how their laws are written in that they penalize clergy. They regulate what individual churches and clergy can do, in this case, one of the central rites of the church. The religious freedom argument here is justified.

But it’s intriguing to see how religious right organizations responded.

Tony Perkins from the Family Research Council, a spin off from James Dobson’s Focus on the Family makes it clear that his concern for religious freedom is not the freedom for all churches but only ones that shares his views: “I would use that term ‘Christian’ loosely. That title is — let’s talk biblical, here’s the deal, it’s like with the Religious Freedom Restoration Act that we worked on in Mississippi and failed in Arizona and other places, here’s a test of what is a true religious freedom, a freedom that’s based on orthodox religious viewpoints. It has to have a track record, it has to come forth from religious orthodoxy.” As a side note, most of gay discrimination bills hitting state legislatures comes from model legislation developed by the Family Research Council.

Tami Fitzgerald, executive director of the North Carolina Values Coalition had this to say: “It’s both ironic and sad that an entire religious denomination and its clergy who purport holding to Christian teachings on marriage would look to the courts to justify their errant beliefs. These individuals are simply revisionists that distort the teaching of Scripture to justify sexual revolution, not marital sanctity.”

The religious freedom argument advanced by many on the religious right is a ruse. It applies only to those organizations who share their views. In a clear case where clergy could be made criminals under the law, no arguments are made to defend such clergy nor is there any particular concern about religious freedom in this case. But liberals should not do the same. That is, whether we agree or not with the religion in question protecting religious freedom should be important to us and fought for. The basic principle of what kind of society we want is at stake.

The threats to such freedom are real. In the US, it tends to be religious minorities that face them, including atheists and agnostics. Our laws still have not caught up to grant equal protection for the latter group. Around the world we are witnessing the rise of both antisemitism and anti Muslim sentiments and this finds itself  into laws which target everything from the construction of religious centers to wearing the hijab and other religious items or clothing.

Dwight Welch is the new pastor at the United Church of Norman, Oklahoma