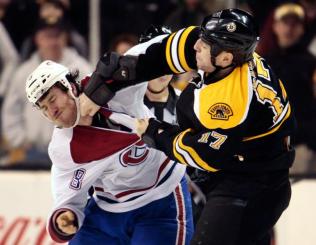 The world is paying a heavy price for President Obama being a basketball fan, because had he followed hockey he would have learned that the best way to deal with instigators and thugs is to demonstrate that you have superior strength. It is for this reason that professional hockey teams use enforcers as a way of protecting their best players.

Historically, the best enforcers have had the privilege of sharing the ice with some of hockey’s greatest players. Marty McSorley played most of his career with Wayne Gretzky. Bob Probert was another enforcer who had a long career playing beside Detroit Red Wings star, Steve Yzerman.

What holds true for Hockey also holds true in other areas of life, like our foreign policy. Many would argue that this approach when dealing with our enemies makes matters worse. But what we have seen in the last few months in Ukraine, Iraq and Syria, is nothing more than the product of this President’s failed foreign policy. Totalitarians like Putin are emboldened by weakness, especially when that weakness comes from the United Sates, which is the only power on earth that can restrain them.

Obama made it very clear from the beginning of his presidency that he was going to take a softer approach with our adversaries. In his first-inauguration speech he said:

“To those who cling to power through corruption and deceit and the silencing of dissent, know that you are on the wrong side of history (like these guys care) but that we will extend a hand if you are willing to unclench your fist.”

Every time he extended “a hand” to our enemies only affirmed our weakness. For example, one of the first things  the Obama administration did was announce they were pushing “the reset button” with the Russians.  They did this in part by removing all sanctions imposed on them by the Bush administration for the invasion of Georgia in 2008. This kind of approach works with your estranged sibling, but not with a former KGB agent.

To further appease the Russians, Obama canceled the “missile-defense agreement” the Bush administration made with Poland and the Czech Republic. Anyone familiar with their history would understand why the Poles and Czechs would want a missile DEFENSE shield. The cancellation was announced 70 years to the day that the Soviet Union invaded Poland as part of the Molotov-Ribbentrop Pact with Nazi Germany.

Let’s not forget that President Obama was caught on a hot mic telling Russian President Dmitry Medvedev, that once the election was over (2012), he would be “more flexible with Putin on missile defense.” Then, there was the Presidents failure to follow through with his threat to the Syrian dictator Bashar Al-Assad, that the U.S. would get involved in that countries civil war if he used chemical weapons.

Putin had made it clear that he wants to see Russia return to what it was before the Soviet Union broke apart, which means the reclaiming of land that once belonged to them as the Ukraine. Knowing what motivates Putin helps us understand why he has invaded Ukraine. It’s like the 1930’s all over again in the fact that the west is just standing by and does nothing. We won’t even give the Ukraine’s weapons so they can fight the Russian rebels.  Consider for a moment the message Sent to Putin in how the west has responded the Russians shooting down the Malaysian flight.

The New York Times ran a story two weeks ago titled, Despite Anger over Downed Airliner, Europe Shies Away From Sanctions on Russia. It laid out how spineless and impotent the West has become in confronting real evil. The article reported that the nations of Europe, with the exception of Britain, have all but conceded the fact that the Russians will pay no price for blowing up a passenger jet. Europe fears the potential consequences that Putin would impose on those countries dependent on the Russians for their energy. Thus “harming the Continent’s economic growth.”

How can the west sit by and do nothing after 290 innocent civilians were blown out of the sky, of which 40% were children? If the west is not willing to act now, what kind of event would force them to take military action. It’s actually a scary thought when you put it into perspective. I fear the world will pay a mighty price for the decision to do nothing while Putin has his way with Ukraine. I hope I am wrong, but what indication do we have that he will stop?

For your entertainment value, here are a couple fights by the two enforcers mentioned in the post. The first video features Bob Probert, number 24 in white. At the 1:00 mark you will see a player in blue going after Yzermen (19 in white). At the 2:04 mark is when Probert finally gets the guy.

Below is a heavyweight fight between Bob Probert and Marty Mcsorley, enjoy!