Religion on Broadway Part I: Arrival

For those of you who do not obsessively follow our Facebook presence, my husband Casey and I recently returned home from a week and a half long vacation on the East coast. We spent 6 days in New York City, so of course our first priority was seeing The Book of Mormon on Broadway. 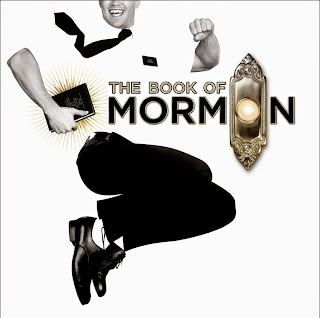 How do I even begin to describe this show? The experience?

If you’ve never had the good fortune of seeing any show on Broadway, I highly recommend it. I have now seen three shows on Broadway, and the performances, costumes, acting, singing, etc. are always spectacular. I don’t know how the Tony voters ever manage to choose their favorites, because the presentations are pristine.

The Book of Mormon is no exception. Being the kind of Mormon who enjoys watching South Park, it was right up my alley in a lot of ways, but I’ll start by giving a run down of the story and few thoughts before I dive into why I really loved the show (spoilers beyond this point, obviously, but I’ll try not to ruin the whole show if you intend to see it some day).

The first players on stage were Mormon, Moroni, and Jesus Christ, and they do an impressively quick job of explaining where the Book of Mormon itself comes from without overdoing the sign posting while still managing to poke fun at, well, a peculiar people. Mormon and Moroni each take turns introducing themselves and their shared job of compiling the Book of Mormon and burying it in “ancient upstate New York”, and they leave the stage as quickly as they arrived.

This is one of many examples of the writers, Trey Parker and Matt Stone, being aware that we are a funny religion but not trying to drag us through the mud when making fun and even managing to explain us more quickly than any missionary would think possible.

We are now introduced to a number of elders including Elder Price, the perfect missionary, and Elder Cunningham, the screw-up, practicing their doorbell-ringing skills in the Missionary Training Center (MTC). We learn that they are at the end of their training and about to receive their assigned companionships and mission locations. Of course, Price and Cunningham are assigned as companions and Price is devastated not only to learn that he’ll be essentially babysitting but he’s also going to a mission other than the one he prayed for.

The pair head off to Uganda, where they meet the beautiful Nabalungi, her father, and a few other townspeople. like any other fresh-faced greenies, the pair believe that all it takes it ringing the doorbells and reading the Book to get baptisms, but they stumble into a land whose local saying is “F*** you, God” and, even worse, where the other elders there haven’t managed to baptized anyone.

If you served a mission, you know this feeling. I remember one of the first questions I asked my trainer was how many converts she had baptized (not her personally performing them, obviously, priesthood and such), and I was shocked to hear that she was still in single-digits. I had always assumed that in South America, there were baptisms weekly in every area, and I landed in a place with only a few investigators, most of which were young girls who just wanted to make friends with the girls from the exotic USA.Elders Price and Cunningham (especially the perfect Price) start to feel hopeless. This is not what they had expected, and soon they learn there is a warlord traveling from village to village who believes that his mission in life is to circumcise all of the women in Uganda. Now they are dealing with not only a faithless people who hate God, but who are also struggling with AIDS, genital mutilation, and murder of those who refuse to comply.

As I watched the scene unfold, I realized… Parker and Stone aren’t really trying to make fun of Mormons. They are trying to bring light to major issues by contrasting them with the perfect, crisp lives of Mormon missionaries just arriving in broken areas.

These are not issues the elders expected to deal with, and their privilege really shows as they try to figure out how to react. It sends Elder Price into a deep confusion as he realizes he doesn’t know how to respond to the local problems. Elder Cunningham enters a similar confusion when he realizes he doesn’t know how to ring a doorbell when there are no doorbells to ring. Luckily, the other elders in Uganda know how to deal with confusing problems–just shove them down deep inside and pretend they aren’t there. Turn off the confusing thought.

To be continued in Part II: “Self Control”

Tagged as: Broadway, Musical, The Book of Mormon