By Brooke W on August 28, 2014 • ( Leave a comment )
Author’s note: This is a continuation of my review of The Book of Mormon musical. You can find the first post here: Religion on Broadway Part I: Arrival

Turn It Off perfectly highlights a common problem among Mormons. We have a lot of trouble with just accepting that people have problems and need to work them out. As I have been public about my support of OW and other more liberal ideas, I’ve been called an apostate and told I’m going to hell for not perfectly following every last word anyone above me ever said.

So jumping back into where we left off, the more experienced elders in Uganda are trying to help Elder Price through his confusion. The district leader takes the lead and compares Price’s confusion over missionary work to his own struggle: his gay thoughts. 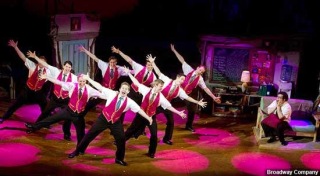 For this post, you need to at least read the lyrics to Turn it Off, (although I do recommend you listen to the song to hear the talented actors really bring it to life) so here you have the abridged version of the words:

ELDER MCKINLEY:
I got a feeling,
That you could be feeling,
A whole lot better then you feel today
You say you got a problem,
well that’s no problem,
It’s super easy not to feel that way!

When you start to get confused because of thoughts in your head,
Don’t feel those feelings!
Hold them in instead

When I was in fifth grade, I had a friend Steve Blade,
He and I were close as two friends could be
One thing led to another, and soon I would discover,
I was having really strange feelings for Steve

I thought about us, on a deserted Island
We’d swim naked in the sea, and then he’d try and…

WHOA! Turn if off, like a light switch,
there its gone! (Good for you!)
My hetero side just won!
I’m all better now,
Boys should be with girls that’s Heavenly Father’s plan
So if you ever feel you rather be with a man,
Turn it off.

ELDER PRICE:
Well Elder McKinley, I think its ok that your having gay thoughts,
just so long as you never act on them.

ELDER MCKINLEY:
No, because then your just keeping it down,
Like a dimmer switch on low, (On low!)
Thinking nobody needs to know! (Uh oh!)

ELDER PRICE:
But that’s not true!

ELDER MCKINLEY:
Being gay is bad, but lying is worse,
So just realize you have a curable curse, turn it off!

ELDER MCKINLEY:
When your feeling certain feelings that just don’t seem right!
Treat those pesky feelings like a reading light!
Turn it off! (Like a light switch, shut it off!)

This song is a perfect example of one of the most interesting aspects of the entire production: the outsider’s perspective.

There are so many parts of the show that are so perfect. The garment line under every missionary’s shirt. The name tags. The naiveté. The companionship struggles. The general feeling towards being gay. The missionary apartment right down to the picture of Christ hanging above the door.

But there are some parts that are obviously coming from outsiders. Ancient upstate New York. “Praise Christ!” Spooky Mormon Hell Dream (okay, maybe some Mormons have had it; I haven’t).
Turn It Off is a funny combination of both. I frequently see in my fellow Mormons that tendency to avoid hard questions and pretend they were never there. They turn it off. I have heard plenty of stories similar to the one in the song about Elder McKinley and his deep-seeded need to turn off his feelings for Steve—even stories wherein Bishops and other leaders have recommended “turning off” those feelings. I don’t see this everywhere or every time, but it’s one of our problems that pops up now and again.
From the outside, these few strange stories combined with the occasional genuinely happy Mormon face in a sad world creates an outsider’s perspective that Mormons are taught in Sunday School just how to turn off any and all negativity. While fun and interesting to see, I don’t think this is at all an accurate representation of us as a religion. Part of getting to be truly happy is dealing with the negativity head on and overcoming it. We’ve all had hard or bad times, but with time and concerted effort, it’s possible to rise above the bad rather than repressing it.

A part of me wishes I could see the show as a non-Mormon to better understand that outsider view and why they say the things they say about Mormons, but I also want to underscore the fact that my Mormon perspective helps me understand that the writers Trey Parker and Matt Stone are not trying to make fun of Mormons. We’re a prop, and my last part will help explain why they really prove in the end how much they love Mormons.

We Mormons are seen as a little strange and needy and may occasionally insist that our way is the best way, and then, sometimes, people believe us. When they do, and the timing is right and everything is working, we help them find a kind of paradise.

To be completed in Part III: Sal Tlay Ka Siti