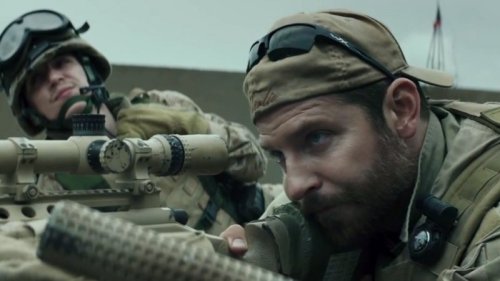 It seems everybody’s talking about American Sniper these days, so I figured I’d join the chorus. The movie’s popularity has exploded, with general acclaim from critics and even more from audiences who’ve made it the #1 film of the year thus far. And there’s no doubt that it’s generally well-crafted, as Clint Eastwood flicks tend to be; with Bradley Cooper earning deserved plaudits for his simultaneously warm, stoic, and haunted portrayal of the titular sniper, Chris Kyle, the Navy SEAL with the most recorded kills in U.S. military history.

The movie has also earned some scorn from the left for various reasons, including this screed from Matt Taibbi at Rolling Stone. He writes,

Sniper is a movie whose politics are so ludicrous and idiotic that under normal circumstances it would be beneath criticism. The only thing that forces us to take it seriously is the extraordinary fact that an almost exactly similar worldview consumed the walnut-sized mind of the president who got us into the war in question.
It’s the fact that the movie is popular, and actually makes sense to so many people, that’s the problem.

To an extent I think he’s right. American Sniper is not interested in criticizing the rationale for America’s post 9/11 military ventures. It makes no attempt to deal with politics or interrogate Kyle’s absolute certainty that he was doing the right thing. By remaining steadfastly “apolitical” Sniper just allows Kyle’s worldview to stand essentially unchallenged, which, as Taibbi notes, is basically what got us involved in Iraq in the first place. There is one very brief but effective scene where a fellow SEAL expresses doubt over their purpose, but it’s never mentioned again after. The movie provides no particular framework for considering a larger picture, except as it relates to the psychological consequences of war and PTSD (which, admittedly, is useful in its own right).

Still, I don’t feel as negatively toward the movie as Taibbi does. After I first saw it I posted the following on Facebook (slightly edited for clarity):

I’m trying to pin down what bugged me about American Sniper.
Maybe it was that a decent percentage of the theater clapped heartily when it ended, which I took as willful, collective complicity in the movie’s subtext about a profoundly unreflective man behaving heroically in a conflict brought about by similarly unreflective thinking. Applauding that shit like it’s a sporting event embodies everything wrong with America’s relation to its military today.

But I think the movie itself was more subtle than that. Clichés were abundant, but Bradley Cooper’s portrayal of an extremely competent soldier unwilling to acknowledge his PTSD carried the film, and Eastwood knows how to stage a tense shootout.

In the end, though, the best I can say is that American Sniper was fine. It just had nothing to say that The Hurt Locker didn’t say far more eloquently six years ago.

My general take on American Sniper, having seen it a second time since, is still that it’s just a decent war movie. Not a classic, and nowhere near the upper echelon of war movies, but not terrible or pernicious. The flip side to Taibbi’s criticism is that the movie has become a rallying point for some segments of the American right, who’ve happily integrated it into their worldview of a country under siege from Hollywood liberals and radical brown people alike. That’s unfortunate, and the movie is partially complicit in that, especially knowing what we do about Clint Eastwood.

However, that doesn’t make American Sniper a bad film, nor something unworthy of watching. It just means that some kind of broader perspective must be supplied by the viewer. American Sniper cannot be watched uncritically. As I see it, to watch the film responsibly is to view Chris Kyle’s life against the backdrop of a war on terror launched nearly fourteen years ago which has led to two of the longest military engagements in American history, hundreds of thousands of deaths worldwide, and, as the recent terror attacks in France remind us, a world that doesn’t seem any safer from the brand of terrorism we’re supposed to be fighting.

From that perspective, American Sniper is not so much a tale of heroism and valor as it is an epic tragedy, almost a farce. Whatever Kyle’s real-life faults, there’s little doubt he exemplified remarkable bravery, demonstrated singular competence, and rebounded from crushing trauma before being killed by a troubled former Marine in 2013. The real tragedy, however, is that when the credits finish rolling the cause to which Chris Kyle dedicated so much of his life was ultimately in service of absolutely nothing.