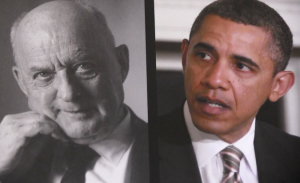 Apparently many on the religious right are upset, even offended by remarks made by President Obama at the National Prayer Breakfast. I admit, I’m at a loss why.  Somehow his talk was taken as an attack on Christian faith even though Obama is a Christian, baptized, and spent two decades of his adult life as a member of the United Church of Christ. He stated things you could find in any mainline pulpit on any given Sunday morning. In that, Obama’s speech was an expression of a liberal Protestant faith.

Even though his talk was brief I’ll provide a structure of his talk. He starts by acknowledging how important faith can be, for himself, for others. He marvels at the depths and beauty and service you can find among the faithful. And he asks how can this be reconciled with how much violence and hatred is done in the name of religion. He gives examples from ISIS to Charlie Hebdo but he also mentions Christian attacks in the Central African Republic and the rise of antisemitism.

He wonders how we can reconcile the two pictures of religion and he ultimately states that when religion turns violent it is because is perverted and misused. He speculates that this begins by religious exclusivism, the belief that somehow our group has a corner on God, both the knowledge of and the favor of. Not only does this produce hatred of others but it also ignores our own faults. As a Christian he includes slavery and the crusades of examples of such faults.

That is the line that has made many on the religious right upset. Apparently a religion where forgiveness is a central category is one that does not need forgiveness itself? If so, than Obama’s point has been made. We have to overturn the central insights of our religious traditions if we seek to justify our history. Or perhaps many in the religious right would be content simply to deny history all together? Either way, for Obama,it is a “misuse” of our respective traditions to ignore the log in our own eye.

But I think the larger point Obama was making is what makes this an apt expression of a liberal Protestant faith. And that is the way he situates doubt and humility as the center piece of a worthy faith. When we are willing to see ourselves as limited, as finite, as human as anyone else who is struggling to make sense of our world, then we can have a more generous estimation of our neighbor. We all participate in the same world, the same unknowns, the same needs as humans. And our traditions can be gifts instead of weapons to be used against others on the same journey.

John Dewey writes “Whether or not we are, save in some metaphorical sense, all brothers, we are at least all in the same boat traversing the same turbulent ocean. The potential religious significance of this fact is infinite.” Obama proposes a recognition of our limits, humility in engaging life, each other, and our respective traditions. Erik Erikson of RedState.org says this is relativism and this makes Obama not a Christian. Yes it is a form of relativism and it’s the basis of Obama’s Christian faith.

First, when we assert that there is a God, we are also asserting that we are not God. Otherwise monotheism doesn’t work. If we have a perfect history, perfect knowledge, perfect virtue we have no need of a God who saves, transforms, even relativizes our sense of things. To quote Reinhold Niebuhr

When the self mistakes its standards for God’s standards it is naturally inclined to attribute the essence of evil to non conformists. The character of moral pride is described in the words of St.Paul: “They have the zeal of God, but not according to knowledge. For being ignorant of God’s righteousness and going about to establish their own righteousness they have not submitted themselves onto the righteousness of God.”

Moral pride is the pretension of finite man that his highly conditioned virtue is the final righteousness and that his relative moral standards are absolute. Moral pride thus makes virtue the very vehicle of sin, a fact which explains why the New Testament is so critical of the righteous in comparison with sinners.

The final proof that man no longer knows God is that he does not know his own sin. The sinner who justifies himself does not know God as judge and does not need God as Saviour. It involves us in the greater guilt. It is responsible for our most serious cruelties, injustices and defamations against our fellowman.

The church is a community of “saved” individuals, who know themselves to be “forgiven sinners” This ideal should make for humility; but the long history of religious self righteousness reveals that religious experience is more effective in inducing repentance for deviation from common standards than in inducing repentance for the hatred, bigotry, and prejudice involved in the common standards of race, nation, or church.

The adherent of religion must come to terms with the historic facts, that in all collective behavior religious piety is likely to sanctify historical and contingent viewpoints. Religious piety is more apt to be found claiming the divine for an ally of it’s own partial viewpoints. “It has seemed good to the Holy Spirit and to us”

Rather than showing a humble awareness of the relative aspects of all historical loyalties or as bringing forth the fruits of repentance for shortcomings as judged by the transcendent God. Perhaps human self hood in it’s collective form constitutionally is unable to imagine any higher value than the common value of it’s devotion.

Hence, the redemptive value of dissident individuals, the prophet, the critic, even the rebel, in a free community.

“When we possess Christ, we possess truth. The President is a moral relativist. It was clear in his whole speech.” according to Erik Erikson. Presumably Reinhold Niebuhr would follow under his censure as well as his brother H. Richard who writes

“Whenever the revelation idea is used to justify the church’s claims to superior knowledge or some other excellence, revelation is identified with something with what the church can possess. Such a revelation must be..under human control of the Christian community-a book, a creed, or a set of doctrines. It cannot be revelation in act where by the church itself is convicted of its poverty, its sin and misery before God.”

You should be catching the idea of idolatry as a form of critique. It’s not a word Obama used but I believe as someone who has read a lot of Reinhold that it forms the basis of his thought. That is why he is not only a liberal but he is protestant. And in a way that is much more aware and connected to the tradition than many of his religious right critics, who appear to rely on a form of religious and American exceptionalism.

Obama closes his speech with a call for pluralism and the separation of church and state. Those used to be liberal protestant virtues that were recognizable in our society. But with the capture of protestantism by the right and the increasing secularity of the left, the very tradition which Obama is pulling from isn’t recognized by either side. As a liberal pastor, I feel obligated to recover this tradition because as Obama has shown in his presidency, it has important resources in relating to one another and our world.