God as Personal but not a Person 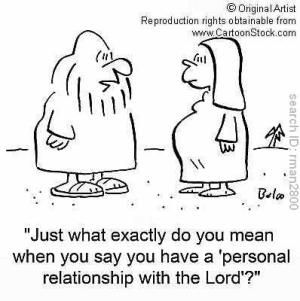 There is a discussion happening between Ryan Bell and Jeremy Neil on whether it is necessary for God to be personal. Necessary for worship and necessary to be connected with the Christian tradition. And is it coherent given the concept or given the kind of world we live in? While Jeremy affirms God is personal and Ryan not, both see it part and parcel of “orthodox” Christianity. Though James McGrath at Exploring Our Matrix questions the latter assertion.

Some of this hinges on what does it mean to say that God is personal? The assumption seems to be that it means that God is a person, a being, supernatural, out of space and time but intervenes from time to time in this world for our benefit. Otherwise we have God who is impersonal, a vague force, the “ground of being”.

It sounds orthodox to say that God is not like us, not limited to creatureliness, but to achieve it by making God more like gravity or the force in star wars and less like a father figure appears to be a diminishment of God. Given my title I think there is a third choice not being considered.

So what does it mean to be personal, what characteristics are we looking for? Google search presented me with this

Although no single definition is acceptable to all personality theorists, we can say that personality is a pattern of relatively permanent traits and unique characteristics that give both consistency and individuality to a person’s behavior.

A brief definition would be that personality is made up of the characteristic patterns of thoughts, feelings and behaviors that make a person unique. Personality arises from within the individual and remains fairly consistent throughout life. Personality refers to individuals’ characteristic patterns of thought, emotion, and behavior, together with the psychological mechanisms, hidden or not, behind those patterns.

To be personal is to have a character, a reliability, a trajectory, and ways of interacting with the world that helps define whatever is being described. Such a definition is broad enough to suggest that rivers have a character, mountain ranges, my alma mater, nation states, companies, families. That is. for something to be personal does not require attaching it to any one entity.

In that respect, while I don’t believe God is a person I believe God can be personal.  If the term God refers to those events, activities, relations that provide for our salvation, transformation, and humanization then as a general term, God can’t be an entity among entities, a being among beings. But the term refers to those parts of our world that do have a direction, have a character, that we can relate to in a salvific way.

God doesn’t have to be outside of this world, away from analysis or even experience to believe that God cannot be reducible to a being. I don’t reduce God to a being because the functions of divinity normally ascribed to God, that of life and salvation refer to too many areas of life and the world. But because it refers back to our world and gives us a way of relating back to it, I don’t think we can sideline personal language for God.

I think the hesitation to the personal is to not just that it locates God in a being. It is that personality is identified with personal consciousness, the kind Dawkins correctly notes, is absent in most of the animal kingdom and is only found in a few species like ourselves. This took a tremendous period of evolutionary time to emerge.

God can’t be personal in that sense of the term. That requires brains, a neural system, physical bodies that could only be had by certain kinds of individual entities. If God is the creative ground of existence then God has to be able to be located before the emergence of personal consciousness.

Now process thought identifies personality not just with personal consciousness but rather with any sort of self direction so that even the plant that moves to get greater exposure to sunlight is expressing personality. The way neurons and electons relate to each other indicates a sort of directionality that properly could be seen as personal. In this way process thought believes our universe is thoroughly personal in its very make up. To describe God as personal then is no leap at all.

Even if we reject the idea that God is a person, we can affirm personal language. We may avoid gendered language, we may avoid anthropomorphic language but God still has a directionality, a character, God is that reality which is for us. In this, progressive Christians are clearly reliant on personal language for God.

I’m not sure what it means that something is above or beyond personality. To be personal is to be an organized whole. Outside of personality is a chaos or a form of disorganization that I would be hard pressed to believe is a “higher” form of existence.

Jeremy Neil mistakenly identified Tillich as an atheist. But Tillich is not. His criticism is not directed against God, but certain beliefs about God that he believed was not adequate. We may disagree or agree with Tillich, but I thought it was important for anybody reading the exchange to start with that piece of information.