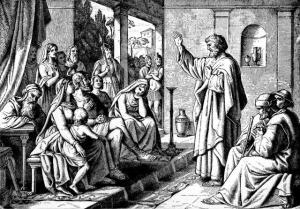 Easter presents us with several problems. It is a story of a cosmic event which changes everything about life and the world as a result. And yet it is hard to imagine how any kind of event could qualify as such. It would mean putting human beings on this small globe as somehow the center of the universe, the center of the divine drama. Can we say that? I’ll venture into that later on.

But when we look around, the world does not appear to have changed that much as result of this event. While Rome would eventually fall, other empires would take its place, while the crucifixion was brutal, more crucifixions would follow, while the Gospel of Peace was preached by the disciples, the Church would replace empire and sanctify it and many resulting wars.

And in light of how we understand the world today, it is hard to imagine that a body can be raised from the dead. I don’t think bodies work that way, I don’t think that is how biology works. The laws of science don’t appear to be something that can be suspended in our favor. If you do believe or you don’t, we’re relating to a mystery. No one belief is a requirement of our church, we have a proud non creedal history.

That is a hard fought for history because in the wider church, beliefs often are a requirement. They are an obligation and a virtue. You must believe. But I don’t think beliefs can really operate that way. They can’t be compelled or threatened. They need not be herculean leaps of faith. They should rather be as natural and fitting to our life and experience such that when held, they simply describe the world as we know it.

All this is to provide a context. They may or may not be yours, they do reflect my own struggle to make sense of the Easter story. Because as progressive Christians, this really is our story. It belongs to our tradition. And if we can make sense of it in a way that really describes our world, in ways that can make for life, then we will have performed an important service for ourselves and the wider world.

I’ve appreciated the process theology book discussion our church has held over this last year. While some of it made it for a tough read, it did provide a vocabulary to make sense out of my own religious thinking. For process thought, one can say that every event is a cosmic event. What does that mean?

It means that any event that happens creates the kind of world we know and experience. It makes the universe just what it is. That is, because events are not discrete happenings all unto themselves. They are fully related to every other event, to any possible future. So there is no such thing as an insignificant event. The Easter story is the kind of story that really does affect everything else.

And while we can no longer believe that we are the center of the universe, we do know that conscious life as we know it, is rare. And it produces a unique kind of value. It does this because conscious life is not simply about repeating the past, but being self-directional, so that the future is genuinely open. And in process thought, God is to be found in the realm of possibility and the future.

So yes, even in our obscure corner of the universe, events and people on this little planet of ours, matters. It matters greatly to God. If God opens the realm of freedom and possibility, than the Easter story is not incidental to God’s aims for our world. Because the Easter story, the Gospel of peace, the disciples preached, the way life outwitted an empire opened up a historical tradition that we find ourselves in today, one which asks to consider what makes for freedom, for peace, for life today.

But even with all this being the case, as I noted, we live in a world today that still faces empire, still faces crucifixion, still faces injustice. Whatever happened in the first century, whether it opened up possibilities, or not, we know that it was not magic. Not all was right in the world as a result. It opened doors but did not guarantee that we would take them. Which is why Peter finds himself in the home of Cornelius, preaching and envisioning what could be if others followed the way of Jesus.

His story is itself is worth noting. The book of Acts is a story of a tension between those Jewish believers of Jesus who thought you had to become Jewish, had to join the religion, to be a follower of Jesus. And those that thought that you could follow him and remain a Gentile. By the time the book of Acts is written this is largely settled, but if you read the book of Galatians when Paul recounts how he “stood up to Peter’s face” you can see the debate was live then.

Peter was identified as a Jewish believer, unsure of how you relate to Gentiles. So he receives a dream, of unclean foods and is told in that by dream by God, that nothing God has made is unclean. There is a message which will preach. So Peter has to weigh, what we has always understood in the tradition versus what he has heard from a still speaking God. He opts for God and in this case inclusion. The first debate in the early church is can we include the Gentiles? The inclusion side won.

Which is how the tradition and this historical trajectory was able to happen and why we can be sitting here, having this conversation. So then he is asked to visit the home of Cornelius, a Roman centurion, one who was not Jewish or Christian but was accepted by God as such and it is there that Peter announces, what he has come to believe. God is not a God of partiality. God is the God of all, not just of some.

Let’s say on the one side you have the old Roman system, where wealth, power, prestige, family lineage, political connections made you someone of value, someone who to be heard. They are the ones, who through the emperor, keeps the “peace of Rome” through might and power. Then you have the story of Jesus, who preaches “the peace of God” by welcoming everyone else in society, women, children, the disabled, the eunuchs, the tax collectors and sinners, everyone on the lower rung of society.

Now, he is killed, the disciples are convinced they have met the risen Christ, a new society comes into being. Like the Essenes, you could create an exclusive society, the folks who get it, with your new hierarchies, your new sources of authority, your new sense of who is in and who is out. The communists did this after overthrowing the Tsarist regime in Russia. The French revolutionaries did this after overthrowing the old monarchy. The church in many ways does this today.

But in the first debate about inclusion, Peter says no. God shows no partiality, God welcomes all. The genuine peace of God comes through that kind of society, what Paul called the body of Christ, what later writers including Martin Luther King, envision as the Beloved Community. And as we serve as an outpost, welcoming GLBT folks (as opposed to what we see the church being on cable TV) our little congregation has a deep connection to the original gospel that Peter preaches on this day.

Nonetheless, what gives the early church courage is the encounter with the risen Christ. As a modern ( do folks use that term anymore?) person who believes in the results of science,  I already gave away the fact that I don’t believe in a physical resurrection. How do we connect with this story if you share that disbelief with me?

But the reason the disciples could experience Christ in their midst, the reason we can experience Christ in our midst, the reason we can say with confidence that Christ is risen is because his life was bigger than a body which can be killed, it was bigger than could be stamped out my empire, it could rise again and find its home wherever people dream of more just world and seek to live out the peace of God.

And that is not a leap of faith, it is simply what we are privileged to be a part of in this church and in this world. And we get to see it all the time.

In a world where we are lazily told that Christians and Muslims and Jews must be at odds, rings of Muslims protect a church in Egypt, in Copenhagen, rings of people circle a synagogue so that it can be safe, Christians greet Muslims to the state capitol in Oklahoma City and welcoming them for Friday prayers. Christian bakers do a flash mob in California to provide cupcakes to GLBT folks.

Jews working for justice in Palestine, Christians working for equality in Indiana, peace happens between Iran and the US, perhaps? It is not guaranteed, lots of things will block life, peace, justice, the realm of God. And yet when we are thinking that nothing can be done, someone is out there doing this, somehow responding to the call of life. And we are surprised.