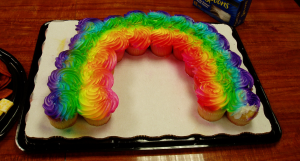 I have a confession to make. I am not embarrassed by miracles. If miracles are those occasions which reveal God and God’s works in the word, if they are signs, we live in a miraculous world. If they are the suspension of natural laws for our benefit by a supernatural agent who intervenes in our world from time to time, I don’t believe in them. Either way they are not a cause of embarrassment. The question is whether the term is useful getting a handle on the world or not.

My presumption is that is the latter that some have in mind when they critique my post and John Shuck’s recent piece. I appreciate the comments. They provide me a way to sort out some of the important questions being raised. I should note, I agree with Rudolph Bultmann that no particular metaphysic is required for Christianity. We’ve had all sorts of systems which have formed the thought of Christian writers.

But as a Christian, I identify with naturalism. That term is so broad and contested that I am reluctant to use it. But I think for this essay it can at least mean that the only world I know of, is this life, this world. That there are no supernatural agents who impinge on it from time to time. The generally agreed upon claims of science forms the parameters by which I am willing to venture for religious claims.

That is different from other theologians who believe science should form the content of theology. For me, theology should not clash with science but its content can be broader than that. It should also include the lived experience of those formed in community and within a given tradition as they engage other traditions and disciplines in sorting out questions of meaning, value, and life.

But if you told me the earth was 6000 years old and this was central to Christianity, I would disagree. I would disagree not just from the resources of the tradition itself, which has historically read the Genesis account as metaphoric, but I’d also disagree because it contradicts what we know of the world.  That doesn’t mean Genesis is wrong. It means it is has resources on a different level than a scientific account.

I think of the resurrection in these terms. If you told me biologically that a body can be dead (not a coma) for several days and then come back, this does not fit with what we understand to be the nature of death and how bodies work. That does not mean I don’t believe in the resurrection or much of the appearance stories in the Gospels and Paul, but it does mean that a descriptive account of them has to be in accord with how we understand biology as much as with the stories themselves.

This feels like a limitation on God. We are told “God is not bound by the laws of physics. He is God and we are not.” And this seems much more expansive. But I would contend ultimately it is not. We are told that we cannot see or hear God. And that is the price paid for transcendence. Edgar Brightman notes in the The Problem of God, that the tendency towards expansion in the idea of God will ultimately make God outside the realm of experience, the natural world, and temporality, for fear of limiting God.

Instead I would use the term God to describe all those features of the world that make for life, for transformation, for growth and well being. Such a God, all of us interact with in every moment of time. Sometimes it is more powerful and evident to us than other occasions. That is why ritual is important, in particular for me communion. We are not simply reminded of God. In the breaking of bread we are having an actual encounter with God. But sometimes we need occasions for us to see this.

In that yes, communion is a miracle, all of the world is a miracle, any possible creative interaction with another is a miracle. But I don’t need to look for something beyond space and time, nor simply in the ancient past for this. I don’t need to see physics suspended. I can simply look around me. Thus the cupcake example. The Christian bakers making cupcakes for the LGBT community was a sign of reconciliation in the midst of conflict, that had a sacramental quality to it.

Is this humanism? In a way, yes. Because we are not interested in just any power out there. We are interested in what makes for human life, what creates the context for meaning and value. Is this subjectivism? No. Our words, rituals and religious traditions have a frame of reference: the wider world. And that provides both the material and the limits for theological claims.

This is why I cannot simply “choose to live” in a world where physics can be suspended. That is not how the world works. If it did, that would be psychologizing not just religious claims but all of the world itself. It is the intractability of nature that means that our wishes and desires are not sufficient to make the world we wish for. It means cooperating with each other and natural realities to reshape the world. These are the the raw materials at hand for us and for God.

But to allow the world and our experience in it to provide the content of theological claims, what used to be called empirical theology is not to reduce mystery. It does not mean God is predictable, safe or even comfortable. Any force for humanization will mean a lot of discomfort; it is how any change including social change happens and it is what makes it worth while and transformative.

And I am certain God outstrips our theologies. But theology is where we begin. It begins with words and it begins with naming reality. Not ignoring it or suspending it. And this world has plenty of mystery to it. Our own inner lives have mystery. The natural world is chalked full of mystery. This provides a basis for  checking hubris. But is never an invitation to stop talking, stop describing, stop trying to use our respective traditions to get a handle of and live together well in this world.