The Republic of Ireland is holding a referendum today to decide whether to extend marriage rights to same-sex couples.

If the vote turns out in favor, it will be a remarkable historical moment. Ireland will be the first country to adopt marriage equality by a popular vote. And though it is close, it does look like that’s where things are headed. All major political parties support a Yes vote. The Taoiseach — or prime minister — also supports it, as do a wide spectrum of small businesses all over Dublin, as I discovered on my visit last week. The only people pushing for a No vote are The Catholic Church and a few other religious coalitions. No surprise there. 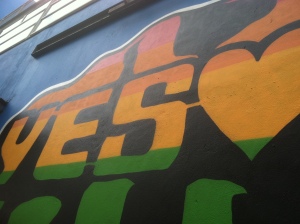 One of many Yes murals to pop up recently in Dublin. This one in Temple Bar.

But it is surprising, or at least worth noting, how far this little island on the far side of Europe has come to stand on the verge of making history for LGBT rights. A generation ago, the Catholic church still maintained a tight grasp on Irish culture and politics, a bit of which I’ve written about before. The country is still suffering form an appalling lack of women’s rights. But over the last couple of decades, the collapse of the moral majority has produced a more diverse, more tolerant Ireland that is ready to embrace all lifestyles.

I think there is no better proof of Ireland’s shifting tides than the No camp’s embarrassing lack of shame. They’ve made no effort to shy away from blatant homophobia in debates, and their posters manage to offend single parents, sterile couples, and even the people pictured on the posters. There is no coherent argument against same sex marriage, and maybe that is the problem, but they’ve managed to single in on a shrill “won’t someone think of the children?” theme. Opponents of the referendum insist that children deserve both a mother and father, despite the fact that just last month the President of Ireland already signed into law a bill granting same sex couples the right to adopt. Not to mention their entire claim that children need two parents of opposite genders has no solid scientific backing whatsoever. They’re also betting on this mysterious entity of a “silent vote,” meaning that the polls showing a Yes win are skewed because most of the people who want to vote no are too afraid to admit it. I don’t doubt that might be the case for some people, but it would be a miraculously shy chunk of the population to swing the vote in that direction.

But here’s one more thing. This is a photo that popped up in my Facebook feed showing the Dublin airport crowded with people coming back home to vote in the referendum. Unfortunately there is no system in place for Irish living abroad to submit absentee ballots, but the fact that so many are traveling back just to vote is pretty rad. 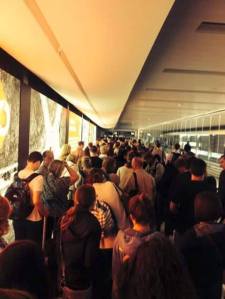 And it perfectly represents what this means for equality and Ireland in general. It can be a cold, dreary place sometimes, and its understandable why so many people who grow up here choose to move away for school and work. And yet, the Irish people I know are warm, welcoming, and loving. There is a reason Irish culture extends far beyond its craggy borders into all pockets of civilization. What better place to kick off a trend of equality decided by popular vote.

Of course, there’s still a few more hours left until the polls close. I, unfortunately, cannot vote, but I hope I can celebrate with everyone who did.