Is the Bible Reliable? 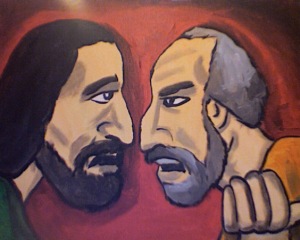 The above picture is Paul and Peter arguing over their disagreements

Why is it important that the Bible is reliable is the second topic among the 8 churches in Fountain Hills Arizona. Last Sunday they all preached on this topic on in their opposition to progressive Christianity and the Fountains Methodist Church in particular. This blog post is written as one progressive Christian response to the claim. But before I do this, I have to admit, I’m uncertain what they mean by reliable.

For something to be reliable it has to be towards some end. And depending on your end you can make an evaluation.

Is the Bible a reliable source for scientific claims about the world? No. It can’t replace the scientific descriptions we have. The world is not 6000 years old. Is the Bible a reliable source of history? Sometimes. But I don’t know any scholars who think the birth narratives are history. In the conquest of Canaan, history and myth are mixed together. It’s not the easiest thing to sort out but the development of the historical critical method over the last few centuries has sought to address such questions.

Is the Bible reliable in its moral compass? That would presume that was the primary intent of the texts. But when you come across the conquest stories just like when you come across modern war stories, it’s hard to see what is laud worthy there. Of course there is moral genius in the Bible, look at the Old Testament prophets. Their condemnations of concentrated wealth and privilege remains highly relevant today.

But as a progressive Christian I can say that the Bible is a reliable account of the faith of Israel. It also is reliable in representing the diversity that is the early church. The fight between Paul and Peter, as indicated in Paul’s letter to the Galatians suggests to me that they did not want a uniform story. They wanted to share their views and when the text was compiled there was little interest in trying to present a single voice, but many voices. This is part of the reliability of the Bible that I embrace.

The Bible is reliable in presenting an alternative vision of the world. Where those without power are given a voice, from the slaves freed in Exodus, the prophets speaking for the poor and dispossessed, Jesus relating to everyone on the underside of the Roman empire, to the women who built the first century church. The Bible enacts out Mary’s Magnificat. And that gives me an account of God I find reliable.

Of course I don’t think that is what the 8 churches meant by reliable. I think they used this term because none of them relate to the Bible in the exact same way. They needed a broad vague word that can be taken in different directions so they could achieve unanimity on the topic. For instance, I bet the ELCA and PCUSA churches there do not believe the earth is 6000 years old. But I bet a number of the evangelical churches do. So they couldn’t use the term infallible or inerrant as a source of agreement.

While they may all believe in the physical resurrection and virgin birth, they probably don’t all agree whether Jonah was swallowed by a big fish or whether there is an end times. They may make different distinctions of what counts as reliability in the Biblical accounts. Which is fine. Progressive Christians do as well. But the topic is a disservice in that it pretends to take the Bible in a agreed upon way, when it clearly doesn’t.

Let me suggest that the differences are worth exploring. Progressive Christianity is able to embrace those differences. We don’t assume everyone will have the same take away from the texts. We don’t among ourselves, why would anyone else? The term Bible, means library, it’s a compilation of ideas, writings, over an extended period of time. Of course there is a diversity of ideas and ways of relating to the text.

Let me offer a few suggestions towards that end.

1) If you don’t have a theory about what you believe about the Bible, don’t worry about it. When you have to have a theory and defend it to the hilt than too often the text is often forced to fit the theory. So for instance, if you believe God cannot change and you come across a text where God changes, you can just let the text speak for itself. You don’t have to try to square it with your theory.

2) And yet it is helpful to have an overall sense of the purpose of the Bible for your faith community. For Augustine it was to increase love of God and love of neighbor. So when you come across a text that does not appear to do that, you can ask yourself whether the text fits the overall purpose of the Bible in your community.

I hope 1 and 2 don’t seem contradictory. The first is meant to understand the text in its own terms. The second is meant to develop ways of appropriating the text for yourself and your faith community. The move from 1 and 2 is the move from text to scripture, from understanding to application. But not every text in the Bible should be applied.

3) The Bible is the beginning of the story, not the end of the story. Some evangelicals and atheists assume that the Bible is the sole content of Christian faith. That the conversation stopped almost 2000 years ago. If so, we are limited indeed. For those of us who believe in a still speaking God, that is not possible.

The Bible becomes important in the many many conversations that have unfolded over the millennia as a result. That becomes a kind of inspiration.I found it helpful that in seminary, the Bible was placed under church history. It was placed along Augustine, Aquinas, Calvin, Schleiermacher, St. Theresa, Tillich and Rosemary Radford Reuther. It suggests that we might be a part of that same conversation that continues onward.