I have been waiting to see the field of establishment Republicans thin out. In this case, by establishment I mean candidates who have held elected office. Right now, GOP polls show Donald Trump in the lead with Carly Fiorina coming in second and Ben Carson coming in third.

Establishment candidates, like Scott Walker, Chris Christie, Rand Paul, Jeb Bush, Ted Cruz, Bobby Jindal, Mike Huckabee, John Kasich, and Marco Rubio have struggled to stand out. Much of this is because Donald Trump has hogged much of the media attention. Trump is also a long-time household name. I don’t think we should underestimate how important the celebrity-factor is. However, much of the problem is that there are too many suits on the stage making it too easy for the unconventional characters to stand out.

Scott Walker’s exit is the first step toward defeating the likes of Trump and Carson. As long as the establishment candidates are tripping over themselves, Trump, Fiorina, and Carson will continue to stand out. Walker acknowledged this reality in his exit speech:

“Today I believe I am being called to lead by helping to clear the field in this race so that a positive conservative message can rise to the top of the field,” Walker said in Madison, Wis. He urged others to do the same to give voters a choice among a limited number of people who can offer “a positive conservative alternative to the current front-runner.”

While it is not unusual to have unconventional candidates like these to make an early splash (see Pat Buchanan, Steve Forbes, and Herman Cain), it is strange to see three dominating the polls at once. Neither one has overwhelming numbers, but what stands out is that the establishment candidates are so far behind.

Matthew Yglesias contends that the next Republican to go should be Jeb Bush. There is something to that argument. Yglesias thinks that Bush would be doing the GOP a service by getting out and throwing his support behind Marco Rubio. However, this part of Yglesias’ argument is more along my thinking:

All the conventional candidates in the field — Bush, Rubio, Chris Christie, John Kasich, and even Bobby Jindal — have something of an obligation to ensure that they don’t collectively do so much to divide the establishment that they let an outsider in.

Part of this filter function is preventing demagogues like Donald Trump from reaching the general election ballot. While the prospect of Trump heading the GOP ticket might make Democrats and others smile, it is a dangerous prospect. We need parties to put forth solid nominees and to block bad ones. This also means that party leadership might just take the form of getting out of the way. 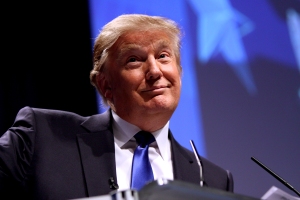