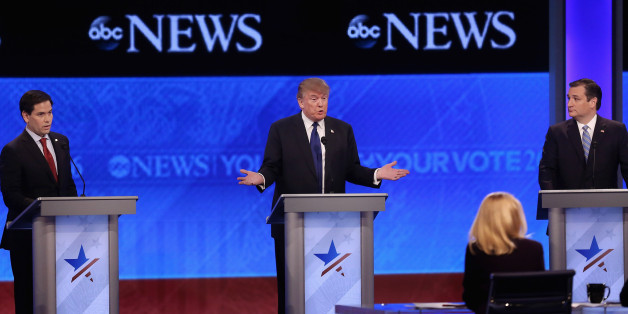 The Trump train looks likely to steam to a nomination unless one of his competitors throws himself on the tracks. But even if their egos allowed it, Rubio and Cruz may not have enough in common to make common cause against Trump. By all appearances, the GOP is cracking up.

The GOP’s crackup stems from a spiritual crisis that’s been brewing for at least a decade. The classic Republican coalition combined faith in God and faith in the nation like stripes on a seamless flag. Those faiths are now decoupling from each other, leaving the GOP in tatters.

The Religious Right formed the core of the classic Republican coalition. When Fundamentalist Baptist pastor Jerry Falwell founded his “Moral Majority” in 1979, he triggered a tsunami of religious nationalism that Ronald Reagan surfed to the White House in 1981. Reagan became the Republican coalition’s godlike founder figure.

After eight grueling years of prosperity under Bill Clinton, the Reagan coalition united behind George W. Bush in his 2000 presidential contest against Al Gore. These “values voters” rallied to the praying president’s compassionate conservatism and Judeo-Christian market values.  Bush was more moderate than Falwell in both his politics and religion, but like Falwell he Christianized property, wealth, and business.

In one 1998 speech, Bush summarized Christian teaching: “love your neighbor, give an honest day’s work for an honest day’s wages. Tell the truth and be honest. Don’t cheat or steal. Respect others, respect their property and respect their opinions.” Conservatism is compassionate, he preached, because tax cuts put money in people’s pockets and welfare reform frees them from dependency.

Since 2000 the Religious Right has weakened. Survey data show that Americans have left their churches in droves over the last two decades. The crisis of faith is most acute among the young and the highly educated. And many of those who still attend their churches now oppose the legislation of religion.

Much of this secularization happened on the left, but there it’s been less divisive. The religious left has always kept its religion and politics as separate as its peas and mashed potatoes. But on the right, the decoupling of faith and politics is breaking up the Reagan coalition. The educated elites have broadly secularized, and evangelicals feel embattled and abandoned.

Secularized elites now form their own “wing” of the party apart from the remnant of the Religious Right. Elites calls themselves the “establishment,” though evangelicals might better claim the title. These groups distrust each other—on the one hand as plutocrats, and on the other as fanatics. That distrust separates Marco Rubio and Ted Cruz, and it separates their supporters.

A parallel phenomenon explains the rise of Donald Trump. As fast as they’ve lost their faith in religion, Americans have lost their faith in political parties. After a decade of gridlock and rising inequality, an alienated class of non-voters and Independents is larger now than ever. Their old gods dead, they drift without hope or meaning. They’re ripe for conversion by a charismatic leader to give them a new god to and new direction.

Into this spiritual vacuum steps Trump, purveyor of a cult of personality. He conveys a sense of grandiosity, but in the plain and relatable language of a country preacher. He makes his followers feel good—about him, about themselves, and about the future. He has all the narcissistic charisma of a successful religious founder.

Trump has galvanized the Independents into a “third force” in the GOP. It remains to be seen whether he can build a lasting faction. But even if his movement collapses the moment he leaves the stage, the spiritual vacuum remains—to be filled next election cycle by some other charismatic figure.