Church Decline: Theirs and Ours 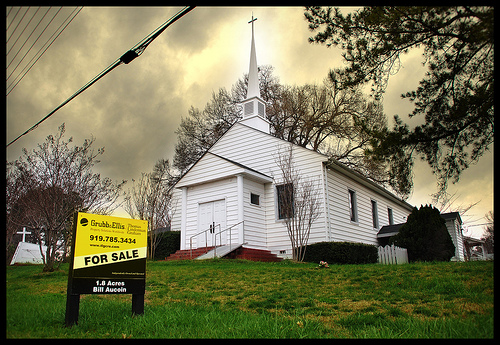 The Institute on Religion and Democracy has a new piece covering a struggling United Church of Christ congregation. A congregation that is on the precipice after giving up its building as well as facing years of church splits.The Boston Globe did a piece covering the painful transitions involved over a two year period.

Before I go into this piece a word on the IRD. The Institute on Religion and Democracy has spent last thirty plus years attacking any expression of liberalism in mainline Protestantism and buttressing any conservative counter to it. This includes politics and theology. In the 1980s that meant defending the Cold War. In the 1990s and beyond, LGBT issues became its most potent weapon in this cause.

I first learned about the IRD through the Re-Imagining Conference, which was a gathering of feminists from several mainline denominations. The use of feminine imagery in their worship, the critiques laid against the tradition was picked up by the IRD and successfully broadcasted to more conservative church members who were able to get the mainline to drop any further support for Re-Imagining.

A year later in 1994 I attend Celebrate. It was a gathering  of mainline college students. I went with several friends from the ELCA campus ministry I was a part of. It was the first time I met Mark Tooley of the IRD. He was going to find a scoop on how this gathering was intended to radicalize us students. As he writes

In 1994, about 1,800 students and campus ministers met in St. Louis to listen to the musings of goddess proponents Edwina Gateley and Rita Nakashima Brock. Memories of the first Re-Imagining Conference, which occurred in 1993, were still fresh. Thanks to reporting by evangelical renewal publications within the endorsing mainline denominations and by Christianity Today,Celebrate II set off a minor controversy in early 1995

I don’t remember a single talk that mentioned the Goddess. Ever. Gately, was a Catholic speaker whose most “controversial” statement was trusting the God who speaks to us in the gut. And given her work with sex trafficking, I don’t think anyone in the religious spectrum could object. Brock did take us through a reading of the Christmas story, noting that Jesus and his family, were for all intensive purposes, refugees, even illegal aliens. 21 years later I was pleased to have Brock speak to my church.

I do remember a video of a lecture by John Spong on LGBT issues in one of the break out sessions and low and behold Mark Tooley was taking notes for his pieces against this gathering. A gathering that is no longer held. I don’t know of any context where mainline protestant college students can get together in this way. And maybe that was the goal of the IRD. Or at least not a conference where liberal ideas could be expressed.

I gather this since he complains that the following Celebrate had conservative voices but :

But traditional expressions of Christian orthodoxy from many of the speakers were counterbalanced by “pro-gay” advocacy and liberal political themes.”

Now I remember picking up a book on process theology from Cokesbury which had a booth there. And it gave me a language of faith. I don’t think IRD was keen on students, like myself, getting access to such views. A “mature” faith would not include process thought, would certainly not include gay Christians authors, etc.

I also observed that the Southern Baptist bookstore seemed to conduct a brisk business among the students. Its materials were very different from many of the books offered at the United Methodist Cokesbury book display area.

College students who would devote a chunk of their Christmas break to a church conference are presumably serious about their faith, or at least their search for faith. But it was another sadly missed opportunity by mainline denominations for genuinely helping young people to mature in the Christian faith.

Rather those of us who found a way to reclaim Christian faith through Celebrate was a “missed opportunity.” Because it couldn’t possibly be “genuine” if the end result was a form of progressive Christianity. Better if we had just wandered into the “nones” territory than have that as a result.

Increasingly that is what a generation of millennials and gen x’ers have done. As Christianity has become identified with the right in the culture wars, increasing number of folks want nothing to do with Christianity. That tends to make groups like the IRD all the more happier. Clear lines separating folks is fidelity to the Gospel.

But what to do with churches that remain liberal Protestant? That complicates the narrative. But the IRD has the most compelling argument. Numbers are on the side of the right. The history of liberal protestantism is that of decline. Now I’d argue the IRD is not incidental to that story. But posting a piece on a UCC congregation struggling to keep going fits a central theme in IRD writings, mainline decline.

But IRD’s focus on numbers does raise a basic theological question. If numbers was the sole determination of faithfulness, than Jesus started his ministry as a failure. And there’re many growing religious movements that no one from the IRD would endorse from the LDS to Unitarians. And there are movements and denominations firmly on the right in the culture war, like the Southern Baptists, which have had real declines.

What do I mean? In 2003 there was 16.3 million Southern Baptists. In 2014 there was 15.5 million. Last year they declined by 200,000 members. At least a 1000 SBC churches have closed their doors. How many stories has IRD written to cover them? None that I’m aware of. They do have a piece why the SBC doesn’t have a problem though. Their narrative doesn’t admit to conservative churches declining and closing.

So we get this:

No evidence is provided. It’s a dogma, it must be that liberalism means decline, conservatism means growth. The problem is it doesn’t help their side or ours.

For one, Congregationalism demonstrated at least a century of liberalism before the creation of the UCC in 1957. Pinning a congregation’s failures to liberalism would ignore much of the denominations and this congregation’s history. Something more mundane seems a foot. Church splits and fights, driving clergy away, power struggles. Doesn’t matter your beliefs, that will not keep an organization together.

Then there is this:

Of course, the Northeastern United States is difficult ground for those seeking to do ministry, and the UCC is not the only casualty. The Roman Catholic Archdiocese of Boston has been merging or shuttering parish churches for years

Is the Catholic church brimming with liberalism such that they should face decline? Or could we admit that secularization, the rise of the nones, the loss of churches and institutional life is not simply a mainline issue anymore. It affects all churches, across the religious spectrum

To get a feel for this, take a denomination which is growing. The Assemblies of God. They reported last year 1.4% growth last year. This is what the IRD calls a “boom.” Who counts 1.4% as a boom? Well we would in the UCC if we had that. But look at their growth rate in comparison to what the E&R and Congregationalists experienced in the 50s which only had 7-8% growth rates. They grew far less than other denominations in the same period.

How could liberal denominations grow in the 50s? Ones adverse to “evangelising”. How could 7% be slow in the 50s and now 1.4% is a boom in 2015? Could it be that there are structural issues afoot that have swept up and challenged all churches? I’d say yes.

Lots of church folks have put their best efforts on the issue. Some argue church plantings, which I serve for the UCC. We have a number of church plants throughout Oklahoma. Some have said sell buildings and go out into the community, which the church in New Meford MA did. Some say become O&A, some say become conservative, some say drop denominational labels, others say retrieve ancient practices.

But I have my doubts about selling church buildings. And the Boston Globe piece re-enforces that doubt. In many contexts church buildings are a ministry of the church. In my first church in Wyoming the building houses the community soup kitchen, the girl scouts, AA and is an anchor for social services in the downtown. Losing that building would lose a chance to do ministry.

My piece won’t offer a magic solution. If there was one, I could be a rich church consultant. Instead I’m just making it up as I go. All I’m saying is the IRD plays on the insecurities of mainline churches and they have no more clue than mainline churches. Instead of theological and ideological conformity, my guess is that churches will try a ton of different strategies, and some may stick and many won’t.

American religion is entrepreneurial that way.

I have two underlying assumptions I would think anybody would have in church work. God is in the mix and despite our best efforts and failed strategies, God will find a way. And that way does not always entail us, or our churches, or our theologies and institutions. But God will find a way regardless.

And that all we can do, regardless of where we are on the religious spectrum, is try to be faithful to what God is calling us to be. In the end it is not about numbers, though I’d like more, it’s about faithfulness. And if I was to connect Southern Baptists and the UCC my guess is that they are both trying to do that in their own way.