The Need for Liberal Protestantism: A Gay Generation X View 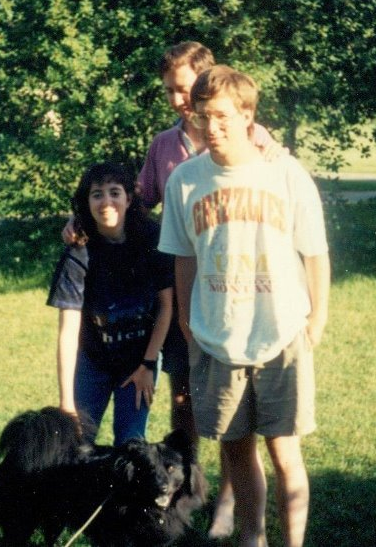 This picture is from the summer of 1994. We were headed to see the 25th anniversary of Stonewall Pride Parade in NYC. Still have the old UM colors to boot!

In a world in which LGBT people increasingly have public affirmation and political protection, they no will longer need the affirmation of the church. When they engage the church it will be because they long for the faith of the church.

This could be one way to summarize the dream that many of us LGBT folks have. That the issue of inclusion is no more because most every place is accepting, in particular the church. So much so that the top question which is raised by LGBT folks will be is: does this church connect because of theological commitments, because of its liturgy?

Well, when I talk about ‘Jesus, and the power of the Resurrection, and the fellowship of his sufferings,’ I get raised eyebrows. When I talk about evangelism, historic doctrines, or believing the Creeds, people tug at their shirt collars…and clergy their clerical collars.

The one generation not talked about this piece is Generation X. So since I am a Gen Xer I thought I would. Because I genuinely find myself in a middle position when it comes to the tradition. Like millennials I don’t want to slough off the tradition. I want to reclaim it. But like the Baby Boomers, I don’t think these traditions can simply be repeated.

In college, a Conservative Jewish friend of mine grew up in a home with no religious observance. His parents were baby boomers. Like millennials, he sought to reclaim it. But in his own way. He made up his own shabbat service, which as a protestant I joined in with in his dorm room. So yes it was reclaiming a tradition. But not repeating it.

Rather the tradition was reconstructed, fitted to the world as we know it. Along those lines, I don’t think we can simply affirm the creed. Nor get rid of it. We need to go through it, I’d say line by line, to re-imagine what it means to speak in this language, sometimes to revise and modify, sometimes to critique, sometimes to re-embrace.

For example, when I say I believe in God, creator of heaven and earth, that should mean something different post Darwin than it meant when the words were penned. It doesn’t mean ditch the statement. It means that as we talk about God as creator, we’d see the claim through an evolutionary framework along with the new cosmologies developing.

Schubert Ogden defines the liberal tradition as a mediation between the tradition, its resources and insights and the knowledge, hard won, we have of the modern world. It’s a path I’d claim. So my religious outlook could be disconcerting to some of the millennial orthodox Episcopalians in the piece I’m responding to.

But I do recognize something in this piece. Yes I’m gay. But it is not enough for a church to be LGBT friendly. It is necessary but not sufficient. Because a larger identity for me is that of liberal Protestantism. I need a place that has room for folks to not just question but also to affirm “heterodox” solutions to our religious questions and problems.

I used to be in Inter Varsity in college. But I was largely forced out. Folks assume it was because of my sexual orientation. It wasn’t. I hadn’t come out at that point. No it was because I helped my Jewish friend start a campus Jewish group while serving in Inter Varsity leadership. It was a commitment to religious pluralism that was at stake.

John Shelby Spong was important in college.  Not because I ended up agreeing with him a lot of the time. It was because he could question anything and everything and remain in the church. That’s what I’m looking for in a church. A place that never blocks inquiry, a church that opens the tradition up to reinterpretation.

Not everybody wants the same thing out of religion what less approaches the subject the same way. Even though the future will be harder for the UCC and other liberal protestant bodies who took the lead on LGBT equality, we really should work for the day in which that is not our calling card even as it remains a commitment.

Instead it is a different way of doing Christianity that creates a space for doubters, skeptics, the undecideds, the non creedal folks, the folks on a faith journey, folks revising as they go along. Such a church will not be for all even as it is open to all. Instead it provide a unique niche in the Christian world. A needed one.

As a side note, since both Generation X and Millennials are apt to hate labels and generational generalizations, you can drop those and I think my piece still holds. You could simply group folks based on their approach to religion instead of their age range. Though I do think there is such a thing as shared generational experiences.