A Liberal View of the Trinity 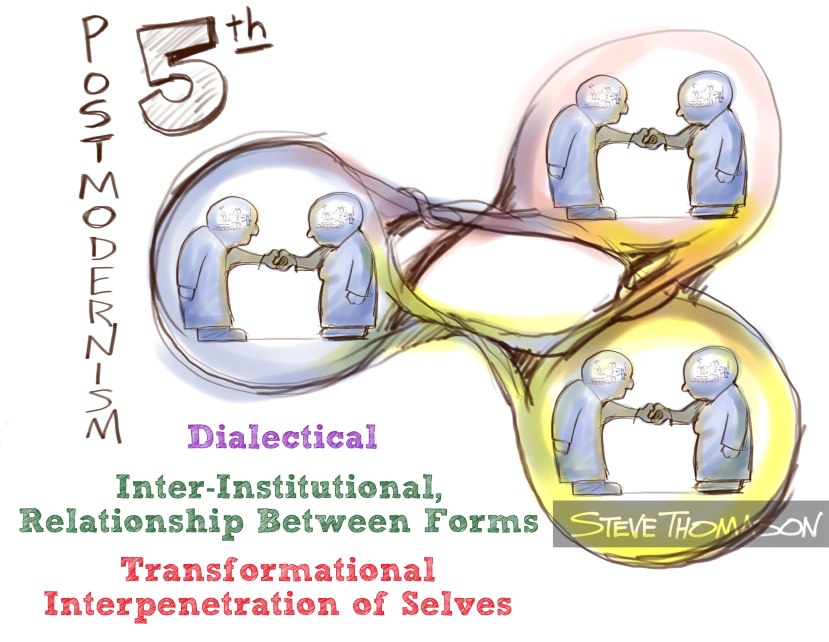 I’ve written on the Trinity before but I wanted another go at it. Because sometimes there is a disconnect between religious doctrine and the issues we face in our world today. And a defense of the Trinity can be seen as obscuring those issues. But to do so, I’ll make a case for the Trinity and then I’ll address some social implications.

Shailer Matthews, describes religious doctrines in terms of patterns discerned about our world and ourselves. What pattern does the Trinity point to?

There is the inner relationality of God as the pattern of relationships which constitutes communities and human life in general. God never acts alone but is in constant mutual love and reciprocity between the persons of the trinity. From this, we have a model for living.

Now Jürgen Moltmann advocates that God is present in all things, and all things are present in God. Pushing further, he speaks of our existence within this fellowship in terms salvation or wholeness.” I’d like to take that insight and run with it in this piece.

The first time the Spirit makes an appearance in scripture is in Genesis. There the Spirit of God, hovers over the deep, and begins the first act of creation by separating water and the land and the light from the darkness. That is, the Spirit separates and makes distinctions which makes for individuality.

Abram is driven out from his people into the desert, and like Jacob, is given a new name to express the creation of something new, a new people, a transformed individual. It is the Spirit which names who Jesus is in the waters of his baptism and it is the Spirit which drives Jesus into the wilderness to take stock before his public ministry.

So the Spirit is intimately involved in the creation of the new, of the individual, of uniqueness, and of identity. The Spirit names things, separates people out, and creates new individuals. If anyone remembers the process of adolescence, the separations involved, in the growing up years, especially from parents, this provides the context for an individual to emerge, with a unique set of gifts, ideas, and personality to give to the world. If you watch the movie Boyhood, which just came out, you get to see that process unfold over many years.

The key part to the previous statement is to “give to the world”. The point is not simply to be an individual but to take that individuality and put it in the service of others. That is what makes it a gift. Paul identifies Christ as the power that makes for salvation. To the degree that our gifts can be put into the service of others, the encounter, the exchange that occurs, can become transformational and therefore salvific. Jesus represents the Christ not in the waters of baptism but when he leaves the wilderness and begins his public ministry.

When we share who we are with each other, what HN Wieman identifies as creative interchange, it can transform individuals. They have a shared experience and the result is a different kind of relationship, one marked by growth and change, where new values emerge that are inclusive of those involved in the interaction.

Because the moment you invite others into your community, you are inviting them to transform you as much as you will transform them. A new community emerges as individuals add their gifts and individuality into the mix. The act of creation which follows is what I understand when I affirm God as creator.

And then there is the political implications:

This three fold process, when separated out, produces problems though. If you have individuals who have no relation or responsibility to others, you don’t have a society nor can you build community. Think Ayn Rand. Think modern capitalism.

Now if you have communities which seek to squelch individuality, they are digging their own graves. They do so, because they remove the possible gifts that diversity can bring and because the problems inherent in these communities have no means of correction. Think any authoritarian system.

It is only when individuality and our relations with others work to build communities which sustain both that you can produce the creative good in life, that is when the act of creation becomes divine.

Recently a Methodist minister claimed that the Trinity is not real. I found it interesting that when conservative Methodists were confronted with this fact the first thing they called for was trials and his removal from his office. Or at a minimum, a forced recantation.

I proposed instead an argument on behalf of the Trinity. But their primary defense was that the Trinity is a required belief given the Methodist Book of Discipline, given the creeds, given the demands of orthodoxy and the “faith once delivered”. An argument from authority.

Their defense of the Trinity meant squelching the diversity of views within the church. Instead of dialogue and debate, which could allow for mutual engagement, this is shut down in favor of some external authority to create uniformity in the church. No creative exchange is possible in this scenario.

Their defense of the Trinity would mean undermining the Trinity in that they would undermine the Spirit that creates individuals and the creative and saving ways that new meanings can emerge from individuals engaging with one another freely.

I think of the Trinity as a way of relating to an issue that has confronted human beings from the start. We want a world where individuality can flourish so that people can be the unique people they are, with all their gifts, quarks, individual perspectives and experiences. And we want to be in mutual relation, in a genuine community.

To bond together means we’re not alone, adrift in our world. And people are hungry for that. But to pull it off, they join organizations and even seek to make a wider society that looks like them, talks like them, feels the things they do. But it also means that other groups are marginalized and not included in this community. To do that undermines actual people in our midst.

This is how you create the ghettos that so many Muslim immigrants face in western Europe, this is how folks are sorting where they live, work, and what they consume so as to mirror folks like them. And it’s how seeing anyone who is different based on race, religion, politics, culture and more is considered such a threat.  They would create walls to define who is in and who is out.

But  a liberal solution cannot simply mean ignoring the needs of community and cohesion, only to celebrate individuals. It needs rather to broaden the circle of us, to broaden who is included in community.  Or as Henry Nelson Wieman writes

“Human existence is better to the degree that all goal-seeking activities are brought into relations of mutual support across the widest ranges of diversity to form an expanding system of activities when this system is so symbolized so that the individual participant can be conscious of the values of it.”

I think for Christians, the symbol of the Trinity, can symbolize the relation between the individual and the whole. It can indicate how love and mutuality in community does not swallow up persons or obliterate them but can act in concert.

It means a narrative that creates a space for and nurtures individuals and their gifts and then works to craft this into a community. It means that the mainline emphases on inclusion is central to what we mean when we speak of the Gospel but not inclusion to be like us. Inclusion that transforms and widens who us is. Which should be the basis for any liberal project.